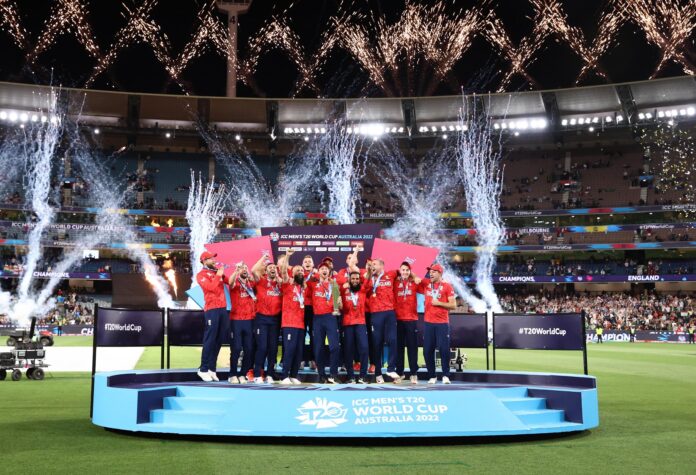 Sam Curran and Adil Rashid bowled brilliantly to restrict Pakistan to 137/8 before Ben Stokes hit a his first T20I fifty to help England win the ICC T20 World Cup final with a five-wicket victory achieved with an over to spare at the Melbourne Cricket Ground.

Bowl first after winning the toss, Curran (3/12) impressed throughout, while Rashid (2/22) slowed down the runs in the middle overs as England’s stunning performance never allowed Pakistan to take the game away, restricting them to a total that seemed at least 15 runs short.

Chasing only 138 at under seven runs an over, England lost three wickets including skipper Jos Buttler in the Power-Play. However, Stokes showed resilience to hit an unbeaten 52 off 49 balls, his first T20I fifty, to see England through. The all-rounder rose to the occasion at the MCG, ensuring England’s second T20 World Cup trophy.

Stokes had also played a crucial role for his country in the 2019 ODI World Cup final win at Lord’s, winning the Player of the Match. The title win makes England the first team in the history of men’s international cricket to lift the titles of 50-over and 20-over World Cups simultaneously.

Defending a sub-par total, Pakistan’s bowlers fought hard until the end although one of their biggest blows was Shaheen Shah Afridi going off the field after bowling the first ball of the 16th over due to an injury to his right knee. The injury resurfaced after he took a catch off Harry Brook in the 13th over.

Stokes then took advantage of the situation, smashing a four and lofting a six off part-time off-spinner Iftikhar Ahmed. Meanwhile, Moeen Ali batted brilliantly, smashing consecutive fours off Mohammad Wasim Jr. in the first two balls of the 17th over.

Moeen Ali ended the over with a top-edge over the keeper’s head before being clean bowled by a yorker from Wasim Jr. in the 19th over. Stokes then reached his fifty off 47 balls with a drive past cover. The all-rounder then finished off the chase with a single through the on-side.