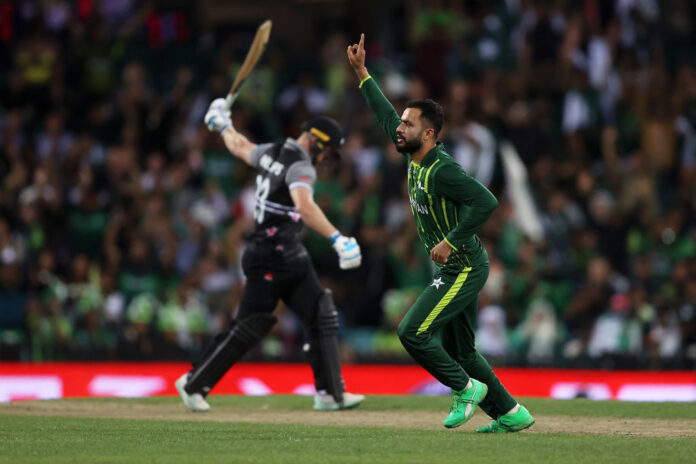 Mohammad Rizwan and captain Babar Azam hit half centuries to lead Pakistan to a convincing seven-wicket win over last year’s finalists New Zealand in the first semi-final at the Sydney Cricket Ground (SCG), and securing a place in the final of the ICC T20 World Cup 2022.

Pakistan are now waiting for the winner of the second semi-final between India and England, to compete in the summit clash at the iconic Melbourne Cricket Ground (MCG) scheduled for November 13.

After winning the toss and choosing to bat first, New Zealand rode on a fifty from Daryl Mitchell and an important knock by Kane Williamson as they recovered from an early jolt to post 152/4 in 20 overs. Aside from Mitchell (53*off 35) and Kane Williamson (46 off 42), Devon Conway (21 off 20) and James Neesham (16* off 12) contributed with the bat for the Kiwis.

However, chasing a relatively easy target, openers Mohammad Rizwan and skipper Babar Azam gave Pakistan a blistering start, scoring 55 in the first six overs which was their best powerplay total of the tournament. Babar was dropped by Devon Conway after which he made New Zealand pay a hefty price. Along with Mohammad Rizwan, Babar played Trent Boult and Tim Southee comfortably in the early stages of the innings.

Rizwan led the way, hitting boundaries while Babar was cautious. Even after the powerplay, boundaries flowed at will for Pakistan as they reached 87/0 after 10 overs. Babar (53 off 42) then upped the tempo before reaching his half century. However, Boult picked up Babar’s wicket after returning to the attack to break the century opening stand of 105 runs.

Rizwan (57 off 43) reached a 36-ball fifty but got out to Boult in the 17th over. Mohammad Haris played a crucial knock of 30 off 26 to take Pakistan closer to victory before being dismissed in the 19th over. But Shan Masood (3*) hit the winning runs as Pakistan chased down the total in 19.1 overs with seven wickets in hand. Trent Boult (2/33) and Mitchell Santner (1/26) were the wicket-takers for New Zealand.

Earlier, New Zealand could only manage 152/4 in 20 overs with Daryl Mitchell scoring an unbeaten 53 and skipper Kane Williamson mustering up 46 runs. However, the Kiwis were guilty of not scoring boundaries in the death overs, falling at least 15 to 20 runs short of what could have been a dangerous total.