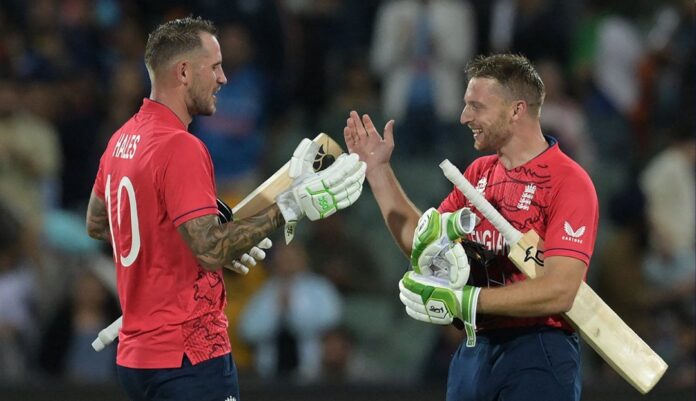 Alex Hales and Jos Buttler smashed half centuries to hand India an embarrassing 10-wicket thrashing in the second semifinal of the ICC T20 World Cup 2022 at the Adelaide Oval. Hales blasted 86 not out off only 47 balls while Buttler smacked an unbeaten 80 off 49 balls as they comfortably chased down India’s 169-run target with four overs remaining. India, despite some lusty blows by Hardik Pandya in the late stages of the innings, could only manage 168/6.

England will now play Pakistan in the final of T20 World Cup 2022 at the Melbourne Cricket Ground on Sunday, which is incidentally 30 years after the two teams had met in the 1992 ODI World Cup final, also at the same venue.

Team India were left defenceless and their bowlers posed absolutely no threat to England’s opening pair of Hales and Buttler, who toyed with the bowling while playing shots at will. England simply outclassed the Men in Blue in all facets of the game.

In the chase of 169, Buttler hammered three fours off Bhuvneshwar Kumar in the very first over to lay the foundation for what would end up being a simple chase. He hit two fours off Arshdeep Singh and Axar Patel while Hales smashed a six over cover off Bhuvneshwar with England scoring as many runs as India did in their power-play in only 3.2 overs.

Hales was the aggressor, hammering sixes and fours at will. He brought up the century stand by pulling Hardik Pandya for a six over deep mid-wicket before following it up with a slog-sweep six off Ashwin. Buttler then played Pandya over fine leg to the boundary before getting his half century with a pulled six over deep square leg.

Buttler finally completed the chase in style, hitting Mohammed Shami over long-on for a six and book a place in the final.