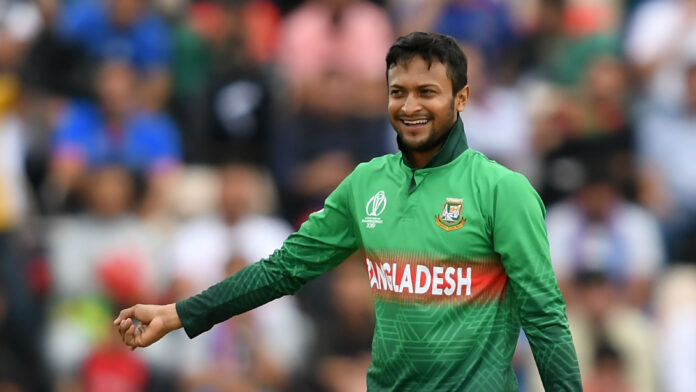 With only weeks to go before the ICC Men’s T20 World Cup kicks off in Australia, fans can expect a cracker of an event. Defending champions Australia have a major advantage playing in their backyard and are firm favourites to win the title for a second consecutive time. The hard, bouncy pitches are suited for fast bowlers who will be looking to make the most of the conditions down under.

With three of the last four editions of the T20 World Cup being played in the Indian sub-continent (the last T20 World Cup was played in Dubai in 2021), there was a bigger advantage for batters and spinners while pacers had to toil in order to take wickets. Thankfully, modern day cricket has taught seam bowlers how to vary their pace, swing, line, and length allowing them to adapt even on the slowest pitches.

Bangladesh’s most senior all-rounder has proven himself as a world class player especially in the shortest format of the game. Having competed right from the inaugural ICC T20 World Cup back in 2007, Shakib has picked up a total of 41 wickets in 31 matches for an impressive average of 17.29, placing him as the highest wicket taker in T20 World Cup history. The left arm orthodox spinner also has a superb economy rate of just 6.43 with best figures of 4/9.

‘Lala’ comes in at number two on the list. Pakistan’s former all-rounder was one of the most explosive players with the bat at the time, and along with Sri Lanka’s Sanath Jayasuriya, and India’s Virender Sehwag, was responsible for bringing change to limited overs cricket. Besides batting, Afridi was an effective leg spinner and picked up 39 wickets in 34 T20 World Cup matches for an average of 23.25. Afridi’s economy rate was 6.71 with had career best figures of 4/11.

With his unconventional ‘sling’ bowling action, Lasith Malinga was considered one of the most dangerous fast bowlers until his retirement in 2021. Malinga proved devastating during his T20 World Cup appearances with a total of 38 wickets from 31 matches. In fact, he even has a five fer with best figures of 5/31. Malinga finished with an impressive T20 World Cup average of 20.07 and a strike rate of 16.2.

Former Pakistan off-spinner Saeed Ajmal takes fourth place in the lost of top 10 wicket-takers ICC Men’s T20 World Cup history. Ajmal made his ODI debut for Pakistan in July 2008 at the age of 30 but subsequently played an important role in the team. Ajma’s T20 World Cup record was fairly exceptional with a phenomenal strike rate of 14.8. The bowler took 36 wickets in only 23 T20 World Cup matches between 2009-2014, ending with an average of 16.86 and a healthy economy rate of 6.79.

Former Sri Lankan mystery spinner Ajantha Mendis, best known for introducing the “carrom ball” and baffling batters with his unpredictable deliveries, was undoubtedly one of the most threatening bowlers in Men’s T20 World Cups. Featuring between 2009-2014, Mendis claimed 35 wickets from 21 matches with astonishing best figures of 6/8. The right arm off-break bowler had an average of 15.02 and a superb strike rate of 13.4.

Pakistan’s former premier pace bowler Umar Gul comes in at number six in the list with 35 wickets from 24 matches. Gul had an impressive international career and was one of Pakistan’s first choice pace bowler following the retirement of the country’s legends, Wasim Akram and Waqar Younis. Gul’s best figures in T20 World Cups was 5/6, and with an average of 17.25 and strike rate of 14.1, was certainly one of the best bowlers at the time.

After the “White Lightning” Allan Donald’s retirement, South Africa were blessed with another express pace bowler who went on to become one of the world’s best – Dale Steyn. Unfortunately, plagued with injuries, the right arm fast bowler’s career did not see him play as many matches as he should have. Nevertheless, he impressed in T20 World Cup tournaments, picking up 30 wickets from 23 matches at an average of 19.30 and strike rate of 16.6. His economy rate was also impressive at 6.96 runs per over.

Once a highly underrated bowler, right arm medium fast bowler along with James Anderson has become a name synonymous with the English cricket team. The 6’6” tall pacer has scalped 30 wickets from 26 T20 World Cup games for an average of 22.36 and strike rate of 17.3. Not a regular member of England’s T20 squad, Broad’s best figures were 3/17.

Perhaps one of the most experienced players in the shortest format of the game, West Indies all-rounder Dwayne Bravo takes ninth place with 27 wickets from 34 matches. Bravo was part of the inaugural ICC Men’s T20 World Cup in 2007 and last played in the 2021 edition. The wily medium pacer has an average of 28.96 and a strike rate of 19.7.

Inspired by Mendis ‘carrom ball’, off-spinner Ravichandran Ashwin introduced the ‘soduku’ ball, a finger-flicked tennis-ball legbreak, while playing in the streets of Chennai before effectively introducing it to international cricket. Ashwin has been an integral part of the Indian cricket team and while he may not be featuring in every match, his record of 26 T20 World Cup wickets from 18 matches at an average of 15.26 and economy rate of only 6.01, makes him one of the top bowlers in the world. Ashwin also has a good strike rate of 15.2.