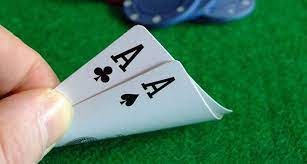 What are Two aces in blackjack? To know everything about it, you will have to read our article below as we have explained everything in detail.

Many blackjack players are unclear about what to do after obtaining a hand consisting of two aces blackjack. The fundamental rule of blackjack advises players to always split a pair of aces. Although obtaining two aces in blackjack can sometimes be equally as wonderful as landing a pocket ace in poker, this one is more eye-catching.

If you want to know what happens when you have two aces in blackjack then in this article we are going to explain exactly everything about it. Therefore, jump down and read everything so that all your questions are answered.

Role of Ace in Blackjack

The ace is one of the strongest cards in blackjack, and the finest blackjack hands call for its use. Having two aces when playing blackjack is not ideal since you want a ten-value card to go along with your ace. This will result in a natural blackjack, which is the best hand in the game and pays 1.5 times the bets.

The good news is that it’s not too horrible when you earn 2 aces in black jack either. To maximize your wins, split aces consistently is one of the most popular and straightforward blackjack strategies. In blackjack, the ace might be valued at 1 or 11, therefore how you calculate 2 aces in black jack is totally up to you.

One of the issues new players frequently have in regards to blackjack is if you always win if you receive two aces. Unfortunately, this is untrue as two aces in blackjack have a value of either 2 or 12. On the plus side, the answer to the question “can you bust with two aces at blackjack” is no. Even if the blackjack payoff after splitting only equals the stakes, it is still wise to split a pair of aces.

The only restrictions placed on splitting aces and eights in blackjack are those set by the casino. When playing blackjack for real money, splitting aces is typically only permitted firsthand. This choice may be completely excluded at some casinos, and it may also occur when playing high-limit blackjack.

It makes perfect sense to split aces at blackjack, and thankfully most casinos permit it. It also has a simple follow-up because it is one of the main pieces of advice in any beginner’s blackjack handbook. Following a split, you are only dealt one card, and you are not permitted to complete a natural after splitting because of the blackjack ace rules. This indicates that the subsequent 21 will not be subject to the same blackjack payouts of 1.5 the stakes. Naturally, splitting requires playing two hands, increasing your chances of winning but increasing your risk.

Since everyone is striving for a natural blackjack, getting two aces in blackjack hands isn’t the ideal situation. With such a hand, there are still many wonderful tasks to do and simple solutions for them. With just a few significant exceptions, the split aces blackjack strategy is almost always the appropriate choice. You will have the advantage if you split aces and have a great chance of making 21, which will probably win the hand even if the profits won’t be worth 1.5 times the bet.

Things you should know about Two Aces

Even though there is a less than 0.5 percent chance of receiving two aces in blackjack hands, it’s still wise to be ready. The dealer’s upcard is taken into account in some of the more complicated double-ace blackjack tactics. If the dealer has two aces in blackjack, hit a soft 12 and split otherwise. Depending on the dealer’s hand and any other pairs (except 8s), you must choose whether to split or double down.

Due to the abundance of aces—nearly a third of the deck—there is a strong likelihood that players will draw ten-valued cards for each ace. Because of this, you should split while playing blackjack with two aces and double down when you can.

If a player who can count cards in blackjack reaches a negative count, they can hit aces. This indicates that the bulk of the cards in the deck still have low values, which implies that the soft 12 you get from the two aces in blackjack might easily be raised.

When you should not split aces in blackjack?

It makes no difference whether you play live blackjack or against computer algorithms; this rule holds true for both single-deck and double-deck blackjack. This is one of the rare exceptions to the rule that splitting aces in blackjack are always a good idea and the cornerstone of any effective strategy.

Because splitting a pair of blackjack aces is so popular, most casinos have regulations about what a player may do in this situation. The most prevalent rule is that after splitting a pair of aces, a player must use the cards that are dealt with them immediately without having the option to double down, hit, or re-split.

This implies that only one card will decide your fate. The annoying rule that receiving a 10 on split aces is not regarded as a “natural blackjack” and does not qualify for a bonus is even enforced by some casinos. Even with these regulations in mind, splitting two aces is usually advised, but it’s a good idea to check the rules of the game you’re playing to see if there are any limitations on how you may proceed after doing so.

FAQs for Two aces in blackjack

What happens in blackjack when you receive two aces?

In blackjack, a pair of aces results in a starting hand value of either a 2 or a soft 12, both of which are troublesome starting hands. A player has two opportunities to hit 21 when splitting aces. The rule is that a ten on a split ace (or vice versa) is not regarded as a natural blackjack and does not receive any bonus.

Can you play blackjack with two aces?

In multiple-deck blackjack, hitting split aces is typically outlawed as well since it gives the player a 0.19 percent edge. Unfortunately, the majority of gaming establishments and online casinos only let one card be pulled adjacent to each split ace. Few would let you draw additional cards in such a situation.

In a blackjack game using only one deck, how likely is it to get two aces?

The blackjack dealer 2 aces are not permitted to split. Assume his starting hand is a 12, and go forward. You can’t do much because the second card won’t be shown until the conclusion of the game, so keep that in mind.

According to the call made by the player at the time, an ace can either have a value of one or eleven in a blackjack hand. Two aces allow you to make two hands: you can count both as one and make a two-hand or you can count one ace as one and the other as eleven to make a soft twelve. This was everything you needed to know about two aces blackjack.

Millions of numbers are regularly cycled around Two Aces in Blackjack Rules. It is hard to anticipate in advance whether you’ll win or lose since the RNG automatically decides the outcome of a spin when you press the button to start it. Every spin has the same random chances that apply to it.

Everything you need to know about Blackjack Tournament