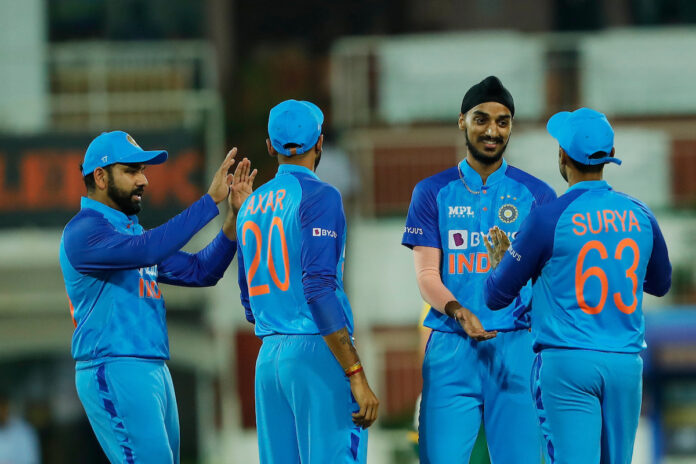 Many anticipated the Indian captain to throw up the towel as Hardik Pandya still had one over remaining from his allotted overs, but he instead delegated the task to Axar Patel, who did an excellent job despite giving up a six off his third ball.

The first T20I between India and Sri Lanka took place on Tuesday in Mumbai, and it was an exciting match that saw the Men in Blue prevail by two runs. Shivam Mavi, who made his India debut, shone for his team by taking four of his allotted wickets and giving up just 22 runs.

The Jammu and Kashmir quick returned with two wickets from his four overs and a speed gun reading of 155 kph.

Keeping up the momentum, India put further pressure on the foreign team and packed half of them with only 68 on the board in the eleventh over. However, Sri Lankan captain Dasun Shanaka and Wanindu Hasaranga kept them in the game as the duo put up 40 runs for the sixth wicket in just 23 deliveries.

Mavi was summoned back into the attack when the partnership appeared to be in danger, and the youthful player immediately gave India a breakthrough. In the fifteenth over, he got rid of Hasaranga for 21.

Shanaka, on the other hand, stayed steadfast and persisted in pushing Sri Lanka toward the mark until Umran Malik struck out the captain with a thunderous 155 kph delivery. He was out for 45 (27), which caused India to gain the advantage in the match.

Malik and Mavi’s quota had been used up, and 29 needed to be scored in the final two overs. Pandya assigned Harshal Patel to bowl the penultimate over. Harshal, though, nearly allowed India to lose the game as he gave up 16 runs and reduced the score to 13 in the final six balls.

Many anticipated the Indian captain to throw in the towel because Hardik Pandya still had one over remaining from his quota, but he gave the assignment to Axar Patel instead.

Patel missed the opening delivery of the over and gave up a single. The third delivery was subsequently smoked by Chamika Karunaratne for a maximum after he bowled a dot.

Many anticipated Sri Lanka to win the match when the equation was reduced to 5 from 3 deliveries, but Patel only allowed two runs in the final three balls. The final two balls, which the hitters attempted to use to sneak in a double, led to run-outs when he bowled a dot in his fourth delivery.

Due to Axar’s work, Sri Lanka’s innings was declared over at 160. As a result, India now leads the three-match series 1-0. The next match is planned for Thursday in Pune.