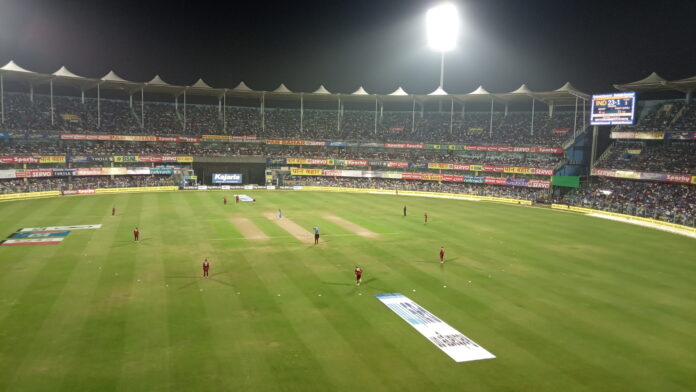 Prior to India’s first ODI match against Sri Lanka, the Assam Cricket Association (ACA) is taking no chances despite the fact that the Barsapara Stadium has recently made headlines for all the wrong reasons.

The Assam Cricket Academy (ACA), which is preparing to host another international game in the next three months, doesn’t want to take any chances, so before Tuesday’s ODI between India and Sri Lanka, the organizers hired pest controllers to spray the stadium complex with snake repellents.

The stadium and the surrounding complex are being sprayed with anti-snake chemicals in addition to fogging to keep mosquitoes at bay, according to ACA president Taranga Gogoi in an interview with The Indian Express. On the night before the game, the stadium was filled with the stink of chemicals.

Devajit Saikia, joint secretary of the BCCI, also made his intentions known, expressing his desire that the ACA will be granted the opportunity to host a World Cup game later this year. “With the ICC World Cup coming up soon, this game is really important for the city. It will undoubtedly be widely watched, and if all goes well, there’s a chance the ACA may host a World Cup game.

The Barsapara Stadium has occasionally been the target of unwanted controversy. Despite a three-layer cover, the first T20I between India and Sri Lanka in 2020 was canceled due to water seeping onto the field. And to make matters worse, the Assam Cricket Association (ACA) officials tried in vain to dry off the pitch, resorting to utilizing hair dryers, steam irons, and battery-operated fans, among other equipment.

The stadium made headlines for the wrong reasons once more in October 2022 when a snake slithered onto the playing field before being chased away by groundskeepers, causing play to be suspended for roughly five minutes. South African pacer Wayne Parnell was startled by the snake as it suddenly appeared from a small, unseen pit in the extra cover area. The groundskeepers arrived and put it in a bucket.

If a snake crawling onto the field during India’s innings wasn’t bad enough, things got worse when South Africa’s chase was interrupted twice by partial darkness in the stadium. One of the four floodlight towers went out, stopping the play. The game didn’t start for about 18 minutes as everyone returned to their dressing rooms as the lights gradually came on one by one.

Government offices and educational institutions must close by 1 pm on this half-holiday in order to participate in the day-night event, according to the Kamrup administration. In addition to designating a few parking spaces close to the stadium, the traffic administration has recommended spectators to avoid private vehicles to avoid traffic jams in the area.

The fact that the game hasn’t been sold out, though, and one could anticipate a few empty rows when Rohit Sharma comes out for the toss, indicates the declining interest in 50 over cricket in the age of T20Is.