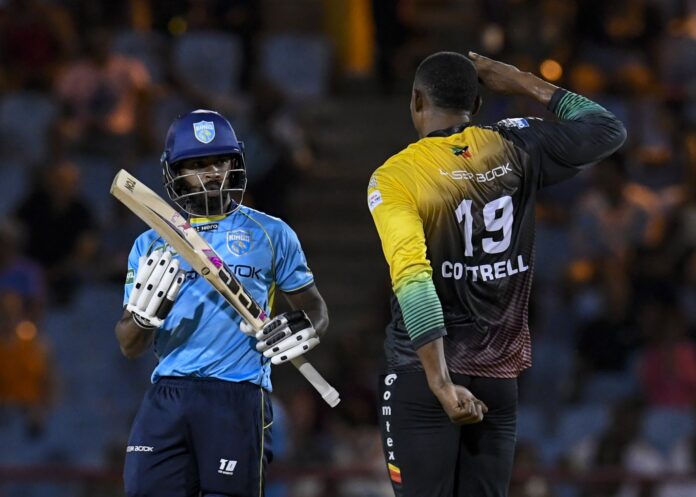 A dominant 61-run victory over St Kitts & Nevis Patriots allowed Saint Lucia Kings to keep their Hero Carribean Premier League (CPL) 2022 hopes alive, after appearing to be in trouble early on in the tournament.

The Patriots made the choice to to field first after winning the toss, a decision they might have regretted as Johnson Charles and Faf Du Plessis put together an explosive opening partnership that saw them hit 61 runs in the PowerPlay alone.

The duo put on 86 for the opening wicket, before Charles was dismissed in the ninth over. His knock of 41 included four boundaries and two maximum hits. But the good start was wasted as St Lucia Kings lost their remaining nine wickets for a mere 75 runs to finish at 161/9, a challenging total nevertheless. It was some late hitting by Matthew Forde that saw the Kings post their total of over eight runs an over.

The Patriots got off to a nightmarish start, losing three wickets for 48 runs in the PowerPlay. The early top-order loss never allowed them to recover as wickets began falling at regular intervals.

A superb performance on the field by Saint Lucia Kings and particularly by Tim David with a CPL record equalling five catches in the outfield, put them in complete control.

Forde was responsible for leaving the Patriots in a dire situation early on, picking up the first three wickets to finish 3/17 while David Wiese took 3/19. The Patriots were unable to to build any solid partnerships as their top order continued to struggle yet again.

After Alzarri Joseph sent Darren Bravo back to the dugout for 20, the Patriots were 81/6, before eventually being bowled out for 100 in 19 overs.