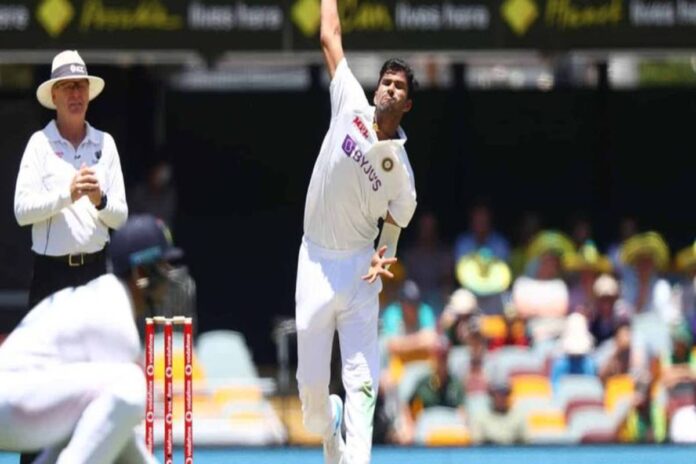 India’s obsession to field a Ravindra Jadeja clone. Ever since India realized that Ravindra Jadeja’s batting was reliable enough for him to warrant a spot in the Top 7, they’ve deployed a five-bowler strategy. The wicket-keeper, Jadeja and Ashwin – in no particular order – slot in at 6, 7 and 8 respectively, giving the side the flexibility to play three more specialist bowlers pertinent to the conditions. In the absence of Jadeja in the first Test in Chennai, the management looked to replicate the same tactic by installing a Jadeja prototype but, erm, let’s say it did not go down too well. The bowling, ultimately, lacked bite and the hosts ended up conceding 578, with the fourth and the fifth bowlers – Sundar and Nadeem – returning combined figures of 2/265 off 70 overs. The wicket, indisputably, was flat, but the 190 overs demands introspection over India’s tactic.

How is the Jaddu-obsession detrimental to the team?

Logically, one would think playing five bowlers in comparison to four is bound to yield the side better results with the ball, but that is a bland assumption devoid of key intangibles. What ultimately matters is if the bowlers picked possess the quality to derail the opposition. In the absence of Jadeja, India were keen to blood-in a like-for-like replacement, hence the eagerness to field one of Washington Sundar or Axar Patel. Both Sundar and Axar are finger-spinners capable of batting at #7, and both offer the three-dimensionality that Jadeja brings to the table.

But while it is true that they bring the same package as Jadeja, there is daylight in the quality of the primary skill (bowling, in this case) between Sundar/Axar and Jadeja. The Saurashtra all-rounder is often celebrated for his three-dimensionality, but people tend to conveniently forget that he is, behind Ashwin, the second-best spinner across the past decade. Completely keeping his batting aside, Jadeja averages 24.32 with the ball, and this number comes down to a ridiculous 21.06 in 33 Test matches at home. Just to put into perspective how good these numbers are, Ashwin, the greatest off-spinner since Muralitharan, averages two more (23.14) at home.

By selecting a ‘Jadeja prototype’ India are fitting someone in the side who does the same things, albeit much worse, but are simply not doing what they should be doing: picking a spinner who offers the same threat with the ball.

Sundar’s outing in the first innings is a classic case in point – he filled the Jadeja-shaped void in the side in terms of the package, yet ultimately failed at his primary job, which is to threaten with the ball. He is by no means to blame for it, for he’s far away from being a Test-level spinner, but him being picked to serve as a third spinner means that he needs to provide a cutting edge with the ball; and not just serve ‘handy’ owing to his package. This would also have held true to Axar had he been picked. Axar, too, is light-years away from being amongst the Top 5 spinners in the country and was, as revealed by Kohli himself, only considered because of India’s Jaddu obsession.

This is not to deviate from the fact that India ultimately found themselves in the position they did because of the lacklustre display of the designated second spinner, Shahbaz Nadeem. Yet these kinds of situations are precisely why you pick a fifth bowler (in this case, a third spinner) – to make up even if one of the premier bowlers have an off-game. Nadeem had a performance to forget, yes, but it was exacerbated by the fact that Sundar was incapable of filling-in and masking it, ultimately defeating the purpose of having a fifth bowler.

“This is just the three-spinners scenario; a Jadeja-prototype can still play if India field three pacers.”

Unless the team plays in a SENA-like wicket which is a paradise for pacers, this statement won’t hold true. India, particularly of late, have been drifting towards accommodating three seamers at home but this does not change the fact that the key to success lies in the hands of the spinners. From January 1, 2015 to up until the start of the ongoing Test, Indian spinners had taken almost twice as many wickets (330) as the pacers (166) in home games. This emphasizes the importance of the role the second spinner has to play, even in a three-man pace attack.  A Jadeja-prototype might be a flexible option but that player will not be of great use to the side unless he is as good as Jadeja himself with the ball.

Does it mean India should just pick their five best bowlers?

This can, of course, always be experimented with, but it will leave the side with a worryingly long tail. For instance, as soon as Axar injured himself, India could have gone ahead with Kuldeep, Nadeem and Ashwin as their three spinners but that would have left them with no half-decent batsman after Pant. Ashwin had a wild day out in Sydney but in his last 17 Tests at home, he averages 11.93 with the bat with no fifty-plus scores. Hence they had to make a compromise, and it came in the form of them leaving out Kuldeep (you could argue the Nadeem selection also had some Jaddu-obsession attached to it, for he is also a left-armer).

So, what is the solution?

Simple: in the absence of Jadeja, India either need to revert back to a four-bowler + 1 batting all-rounder strategy or ensure that, barring Ashwin, the second spinner they pick is the best spinner at their disposal, treating the No.7 slot as an all-rounder. In Chennai, Kuldeep, despite being a bigger threat than Nadeem, was overlooked because he turned the ball the same way as both Ashwin and the Jaddu prototype Sundar; as it turned out, Sundar and Nadeem’s lack of dexterity made the decision look ridiculous.

Cracks can be papered over on turning tracks but, as was the case in the first two days of Chennai, on flat wickets it will be skill – and not the package – which will help punch holes in the heart of the opposition. Particularly with India completely reverting to preparing ‘we-will-outbat-you’ kind of flat wickets, it would become increasingly difficult for the side to bowl quality oppositions out at home with just one world-class spinner.

A four-bowler + 1 batting all-rounder (who here replaces the Jaddu prototype) strategy is less-ideal but it would, nevertheless, solve any kind of concern with regards to a long tail and enable the skipper to field the second spinner simply based on merit, not worrying about the individual’s other credentials. With Pandya unfit to bowl and with Vihari nursing an injury, though, this option, one imagines, would not be feasible for the side in the last three Tests.

Why the Jaddu-obsession is unhealthy in the long run

For more than one reason, India’s obsession with finding the perfect like-for-like replacement for Jadeja is unhealthy. One, as previously discussed, is the compromise in the drop in quality of bowling but secondly, and most importantly, the long-term ramifications it could have on the kind of expectations the management have from spinners. The selections of Sundar and Axar now, and Jayant Yadav previously, are clear indications of the management’s affinity for slower bowlers who can contribute with the bat (largely because most of the seamers can’t hold the willow).

“Bowling combination we’ll try to give us as many options as possible, along with guys having the ability to contribute with the bat. That’s been the pattern for success for us in home conditions over the last few years and that continues to be the case this time around as well. The combination we’ve played in the past where guys can bowl and bat is something that will be at the forefront of our plans,” Kohli had said a day before the commencement of the first Test.

Grooming all-rounders is healthy but to discard spinners ‘only’ because they cannot contribute with the bat is preposterous.

India, currently, have as many as two back-ups for Jadeja, but are at a point where they have little clue as to who their best spinner apart from Ashwin and Jadeja is. Kuldeep was supposed to be the answer but his progress has stalled, and this has a lot to do with the fact that he continues to be overlooked simply because he does not tick other boxes unrelated to his bowling.

If India are to not find themselves in a dire situation post the Jaddu-Ash era, they need to start investing in their best spinners. And by investing, it means not only identifying who those players are, but giving them the opportunity to develop and learn their trade while the big fishes are still around, and not just throwing them in the deep end when the time arrives. As things stand, they are not doing it, and it could have long term consequences.