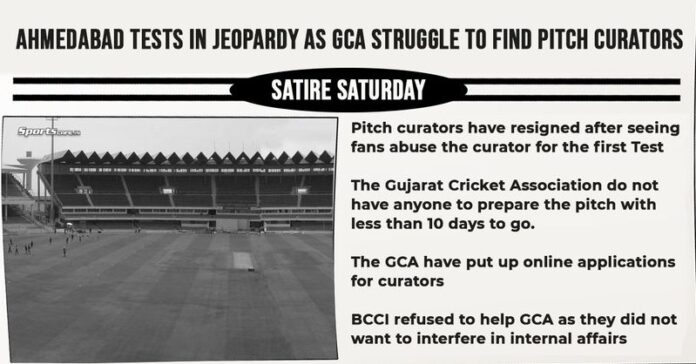 Test matches have been cancelled due to bad weather. Due to a pandemic. Due to terror attacks. But in a fortnight’s time in Ahmedabad, there could very well be a first.

144 hours. It is what officials at the Gujarat Cricket Association (GCA) have spent in an attempt to rope in a credible pitch curator for the forthcoming historic two Tests scheduled to take place at the now-largest stadium in world cricket, the Sardar Patel Stadium in Ahmedabad. Yet after 6 days of toiling, unanswered calls, blue ticks on Whatsapp and locked gates in the streets is what they’ve been hit with. In the aftermath of the relentless abuse aimed at V Ramesh Kumar, the pitch curator for the Chennai leg of the series, curators in Ahmedabad have been on the run.

The story goes as follows: the pre-series interview given by Ramesh Kumar, who everyone by now knows is an accidental curator, was a matter of pride for curators across the country. They are, after all, the unsung heroes of our sport and for them, it was groundbreaking to see ‘one of their own’ get global recognition, that too ahead of a marquee series. In particular, Ramesh’s interview going viral brought a wide smile to the face of curators in the vicinity of the state of Gujarat, who knew that they, like Ramesh, could very well get their time in the spotlight should they be summoned to prepare wickets for the Motera leg of the series.

Yet 2 days was all it took for the tens and hundreds of curators to fear for their lives. Seeing the abuse copped by Ramesh on social media for producing an unsatisfactory wicket in Chennai, the men who matter made their move – without second thoughts. 15 curators associated with the Gujarat Cricket Association (GCA), including Mr.X who upset Baroda fans last week by preparing a rank-turner for the Syed Mushtaq Ali Trophy Final, handed their resignation. A handful of other part-time and full-time curators went AWOL, and so now, with less than a fortnight to go for the third Test in Ahmedabad, the GCA find themselves without a curator.

“They’re all gone. Every single one of them. No one is reachable. We’ve tried everything,” a GCA official tells SportsCafe.

“We’ve made calls. We’ve sent texts. We’ve even conducted physical searches. But there is no sign of any curator. If the situation extends, then we are potentially looking at the last two Tests getting cancelled,” he adds.

The reason for the mass exodus, the official confirms, was the turn of events in Chennai. The never-seen-before hatred directed towards the curator for the first Test left all curators disturbed, to the extent that some even told him to never contact them again.

“Of course. After what happened last week, who would want to be a curator? The poor guy was hounded online for doing his job and ‘fans’ left nasty comments everywhere they possibly could. Abuse is something cricketers cop, yes, but at least they get paid handsomely. But what about the curators? Who in their right minds would want to risk their reputation – and life – in return for peanuts? I honestly don’t blame them.

“Mr.X was the first person to go. We thought it was understandable because he had already received flack for the wicket he prepared in SMAT. But we did not expect the rest to follow suit. Every single one of them gave the same reason. We even tried reaching out to a few dangling a ‘bonanza payment’ carrot but it just did not work. They were all firm in their stance. It’s the Indian fans who ruin Indian cricket, I tell you.”

Interestingly, the official reveals that, impressed by the wicket in the first Test in Chennai, the GCA even reached out to Ramesh. To their disappointment, though, the 42-year-old from Tiruppur had made up his mind even before the offer arrived.

“Of course, we all loved the wicket,” he says. “It deteriorated ever so gradually and it ended up producing a result with almost two sessions to go. How was it bad? These people, I tell you, they only whined because England batted first. Do you think they would have uttered a word had India scored 578? In fact, India scored 502, 615, 497 and 493 two years ago. Did people complain then? Again, I tell you, it’s the Indian fans who ruin Indian cricket,” he says, adding that it was “disappointing to not get Ramesh on board.”

When asked to give some insight into his conversation with Ramesh, the official reveals that the MBA graduate was ‘dead inside’.

“The first thing he told me was this: ‘F*** me, I should have stuck to Cosimo International and Allwin Colours’ (his two apparel companies). He told me that he will never return to pitch curation again. In response, I joked that he will serve as a good example for curators to, hereon, not give interviews, and he didn’t take it well. We’ll see how the second Test goes, but redemption is a long way away for Ramesh.”

But for the official, and the GCA, whether Ramesh dishes out a fan-satisfying wicket for the second Test is the least of concerns. For him, the priority is to find a curator who can lay the wicket for the last two Tests. For that, the official says, he and his colleagues have resorted to innovative means in hope of finding ‘the one’.

“Considering Ramesh was an MBA Graduate, we paid a visit to every single university in Gujarat in hope of finding another accidental curator. We’ve distributed brochures, so in case anyone reaches out to us, we’ll test them to see if they’ll cut it.

“Not only that. We’ve also put up job applications online. But unfortunately, it’s the goddamn unemployed engineers flooding our inbox yet again.”

Interestingly, the official reveals that when he informed the BCCI about the issue, they dismissed it instantly.

“They said that it’s up to the GCA to resolve the issue. BCCI said that external parties getting involved in internal affairs is unethical. So we have two options now: either we find an accidental curator, or we come to an amicable solution with the now-resigned curators.”

But are the curators ready to talk? We reached out to one, and his answer is ‘No’, unless the situation –  fan opinion about curators – changes drastically across these next five days.

“We’ll see. We blame Kohli for this. None of this would have happened had he won the toss. Or even won the match. Why didn’t he? Why couldn’t he? We are still ready to prepare the pitch if need be but we knew that we had to take a collective stance against the atrocity. We are not spineless,” the curator said.

Well, Kohli the captain righted his wrong by winning the toss today, but Kohli the batsman let the team down. If this is the application the Indian captain is going to show, can we really blame the curators for backing out?