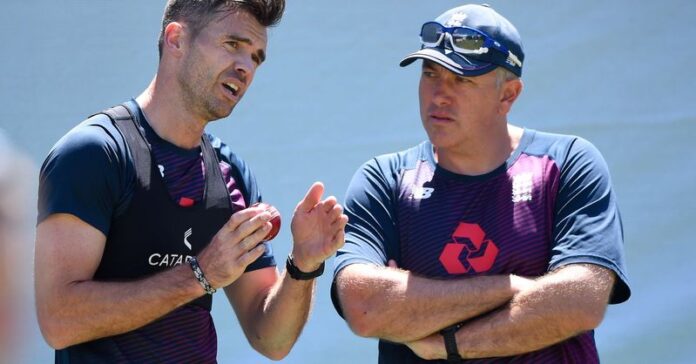 It isn’t an overnight process, it certainly wasn’t a process that seemed to be happening under the guidance and tutelage of Trevor Bayliss, under whom England failed to keep hold of the Ashes at home in 2019. That changed English cricket, for the good!

England had not just lost the Urn at home for the first time in almost two decades to Australia, they had lost their identity – something that they have held with pride. The pride turned petty, results became ugly and the team was in a state of shock. So who do they look at, to resurrect the damage? Chris Silverwood, the ageless workhorse on the domestic scene – someone who understands workload more than others in the scene and definitely someone, who trusted plans more than results.

It was him, it was exactly an opposite figure to Trevor Bayliss, who trusted blindly in results, picking up players from different formats and pitting them against each other. His first move, something that stood completely different from all other alpha-coach moves, was to trust the community – trust the factory that yielded them the profit in the first place. That’s when he closed his eyes and trusted the process – putting domestic cricket in front of the others.

A line of players followed suit – Rory Burns, Zak Crawley, Ollie Pope, Dan Lawrence and Dominic Sibley in the batting department. In the bowling, especially where he has shown immense faith – there was the new line of English bowlers, with Dom Bess, Jack Leach, Jofra Archer, Olly Stone combined with the old-guards, James Anderson and Stuart Broad. That didn’t make England extraordinary but it made them fall in love with the process, yet again.

With Silverwood, there weren’t all the flashy things that surrounded him, no real jazz-like his name but a steady process that showed England their reality. Complacency was never going to be accepted, hard work and grind, never ignored. Yet at the same time, continuity and workload management was something that set his tenure apart from the others. Following the footsteps of Peter Moores, he became just the second English coach in the century but more importantly, belonged entirely to the domestic grind.

Silverwood’s ability to handle such a young squad, such an inexperienced lot was something that made a startling difference, an immediate impression after his first series. England were never ever the hara-kiri of Test sides but went back to their age-old tradition of sticking to Test’s heartbeat – a slow and processed version of the game. The best definition of this team’s attitude – their wins in Chennai and Cape Town. In both the places, they were under the pump – one for being too slow in their process and in the other, with their declaration.

But what stood out both the times – their bowling attack which picked up 20 wickets in the game, not a bad mean for a side, which was considered as home-floppers. With that, also returned England’s familiar outlook of the game – steady openers at the top, crafty players in the middle-order and a bowling attack that could pick up 20 wickets in any conditions.

Wisden put his tenure down perfectly, steady with the bat, 3.21 runs per over, in comparison to 3.25 from Bayliss’ side but with a bowling performance, that saw dinosaurs of improvement. The overall dot-ball percentage rose up to 77%, economy rate to 2.89 and wickets-tally, more than ever. His ability to stay put, take control over his emotions saw a rapid rise for England and that combined with his trust in the players’ group has taken them from nowhere in the cricketing world to beating India in their own backyard, where odds were stacked against them.

“If you look at what we’ve got in front of us, before we get to the Ashes we have nine Tests against India. What a fantastic way to prepare against very strong opposition. There’ll be some great cricket and all the guys here are excited to play in those series, just as we are excited to play in this one,” said Silverwood ahead of the series against India.

That shows what exactly the former pacer was eyeing – an opportunity to showcase their talent but against the best of sides, at the most testing of paces. He didn’t want it easy, he didn’t take the short-cut but instead embedded one of the most important aspects of Test cricket into the system – long patience and high-rewards. Since he took over, England have been on the run more than they have been at home but even during these testing times, they have looked more at home than the hosts.

Series against South Africa – Down and out in the first Test, England were under immense pressure to live up to their expectations after beating New Zealand. And they arrived, winning all the three remaining Tests, where they had performances from everyone in the playing XI. Ollie Pope arrived, Dominic Sibley arrived, the ever-performing – Ben Stokes and Joe Root too joined the party. But what was more impactful, during the series was how Silverwood got the better from Zak Crawley and Jos Buttler. That combined with how his bowlers put their hands up, they notched up a near-perfect 3-1 series win.

At home, England were never going to be in trouble, so the real task was 2021 – India and Sri Lanka – both in the subcontinent, a place that has got the best and worst of them. But in both places, they made bold statements – rotating players with a firm eye on the T20 World Cup and the fatigue that would work their way in. Australia lost a Test series against India, at their own den but what stood out from that was how tired the bowlers were during the Gabba Test, the last leg of the laborious tour.

How do you handle pressure, tiring legs and rotating players effectively during a high-pressure situation? Ask Silverwood! Arriving in Sri Lanka, Root lost the toss at Galle, one of Sri Lanka’s real fortresses, where the fourth innings is arguably the toughest to bat on. But with ease, England not just picked 10 wickets but they struck 20 times to get a booming Test win. There was Joe Root, at his best, easing past all the troubles, leaving behind his disdain form.

“Looking at what we’ve got in front of us with a lot of Tests in India as well, it’s highly likely that there will be rotation and rest within the seamers’ line-up,” Silverwood said, ahead of the series.

“There’s plenty of things on the table at the moment, so we have to do what’s best for the players and equally, making sure that we’ve got the strongest balanced attack out there to make sure we win the Test match as well,” he added.

The words indicate clarity, not just clarity over words or thoughts, clarity over action, planning and getting their ‘A’ game to the party. They went 2-0 over Sri Lanka, without Moeen Ali, without Ben Stokes, without Rory Burns, without Jofra Archer. But they had James Anderson and Stuart Broad, who played at least one Test in Sri Lanka. The motive behind it – keeping them engaged enough in the game, so that they can pick up from where they left off and two, to keep them fresh for the Indian leg.

If you think that was it, the way he handles the media has just put an extra sense of posterity in the English camp. Everything seemingly looked calm-composed and with a sense of intent. His fleeting advice, to take responsibility away from the field, to keep the entire team in a trance-state of mind and get them just ready for the contest.

“I try and take away any worries he might have in and around training – I take responsibility for that so that when it comes to training he can just focus on his batting and enjoying himself,” Silverwood said during a press conference on Wednesday (February 10). “Then during game day, it gets handed back over to Joe.”

With their sixth consecutive away win, England are just one win away from equalling their own record but what is more impressive during the time – is their ability to do it all without much chaos, trusting the core group of players, every single time. Chris Silverwood has turned England from home losers to match-winners but more importantly, he has turned them into a group of believers – that process will bring out results and results, will bring out the happy faces. That’s why cricket is played.