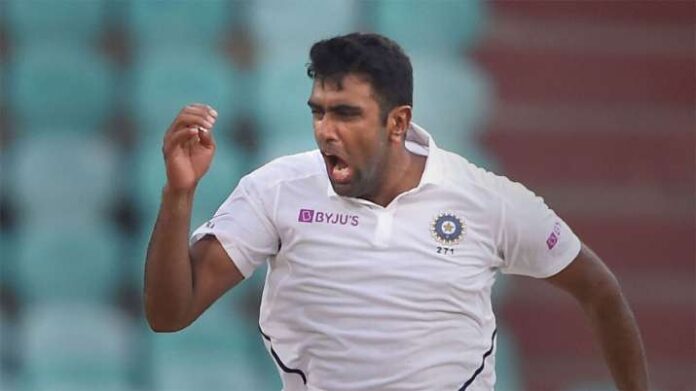 There’s only so much that we can write about Ravichandran Ashwin, that would talk about statistics because he is hell-bent on breaking them, every single thing when he walks out to take the field. But what is safe to say, he is here to stay, as Tamil Nadu’s greatest cricketer and a ‘Master.’

On 13th January 2021 – Tamil Nadu witnessed its first-ever blockbuster after a long pause due to COVID-19, as Vijay’s Master was all over the theatre screens. It even led to multiple people mimicking the actor, humming the lyrics and chastening the charisma.

Just one month later, there was another blockbuster, another Vaathi (Teacher) who was coming for them all – Ravichandran Ashwin. India had just lost a Test at Chepauk, it’s fortress but there was the good news, the inevitable one coming their way – the crowd were back, to not just witness India but to witness their hero, Ashwin.

Ashwin’s last Test appearance was also India’s last at the venue, Ashwin’s last fifer was also the last and everything that was associated with Ashwin would have created an immediate impact with the crowd. Long since WV Raman gracefully played his innings, with utmost calm and composure, ever since Murali Vijay made them whistle to the tunes, Chennai was always looking for someone they could look up, a master, a vaathi, call it anything you want. The crowd gathered in numbers, in thousands, in around approximately close to 14,000 on day one.

Test cricket was returning after a long time, India had just lost their first Test at the venue, there were bound to be a few nervous figures but as soon as Rohit took ascendancy, the crowd hopped on. More than anything, the crowd knew what the outcome would be, or more importantly, who would dictate the outcome. It wasn’t all about the Indian team, remember? It was more, the crowd wanted to applaud, ricochet the sound into the ground and lift the morale of the team.

But more importantly, they waited for England’s batting, not to witness Joe Root but to witness vaathi’s raid; Ashwin’s bowling. A master of the art, the man who knew probably too much about his art, knew the whereabouts of every delivery and what it could do, really deserved the applause of the crowd. Ben Stokes stood bamboozled by his wicket, the crowd didn’t give two stokes about the batsman, they were more interested in the celebration, the Chepauk in unison sprung up on their feet, applauded the mastermind Ashwin, the man whose art knew no boundaries.

There hasn’t ever been a cricketer that the city has seen that clever, emerging out of the shadows, talking the language they have, since WV Raman. They haven’t seen anyone more entertaining than Ashwin and his bowling. They haven’t seen much action in the city, since Vijay’s Master. So when India were indeed playing, there had to be celebrations right?

At least in this part of Chennai, away from Chepauk, in West Mambalam, where Ashwin had spent some time of his life, the fans were glued to their television screens, some even wanting the off-spinner’s name to be on the stands of the age-old stadium. Having a name on the stand is not just a sign of approval, it is a sign of appreciation for all the dedication that the cricketer has indeed put for the state and the country. Some felt, at the age of 34, Ashwin already deserved it and the others were in unison.

Before the series, Kohli called Ashwin one of the most important members of this Indian setup, Chepauk didn’t disagree, they were in unison marvelling at the amazing tricks that he keeps pulling off. There are circuses in the city, mind you where this stuff is done on a regular basis but this is the best of best, Ashwin with the red-ball in his hand playing around with the opposition, as though he was destined to do all of it. When he had indeed walked back to the hut, with the red-ball in his hand, raising towards the crowd, like it was a scene from a dreamy world, the crowd acknowledged and bowed down.

When the talks of the pitch upped the ante, Ashwin came out with the bat, albeit with a nice first-innings lead and played a masterful innings. At no point did he look uncomfortable and at no point, did he look perturbed. He knew that even at his worst point, the Chennai crowd were there, holding him up, this wasn’t going to be that bad. The crowd gave the leap of confidence back, cheering for every single of his run. There was even a time when Ashwin received more applause than Kohli.

The man who not only redefined spin bowling, all-rounder status or even cricket in the country, had redefined the expectations of the crowd.

They knew of him and he knew of them, offering a poetic justice, as he completed his century. The crowd even cheered for every single dot from Mohammed Siraj, every run that the bowler ran pretty hard and every single nuance which got Ashwin back to the strike. He scored a century, the crowd lifted its helmet as a mandatory celebration. He smiled, the crowd followed, he acknowledged the crowd with a little bow but the crowd knew that there was more to come from him.

As he walked into the ground, after spending just a few overs off the field, the crowd knew and cheered, he took the new ball and then picked up the wicket of Rory Burns. England were three down, Ashwin needed four more to strike a different historical chord. He ended up with two more but that didn’t bend or break the crowd. They were waiting, still in packs, even after the game had ended, even bearing the sun at its rawest form.

“As an eight year old I have come here on these very stands to watch cricket. I have played four Test matches here and easily this is the most special. I get a hero’s feeling here playing cricket in Covid times, and this knowledgeable crowd came out in big numbers,” he uttered in Tamil, in acknowledgement of the crowd, who gathered in numbers. He was the man of the match but for Tamil Nadu and the fans that crowded, he was not just the man of the match.