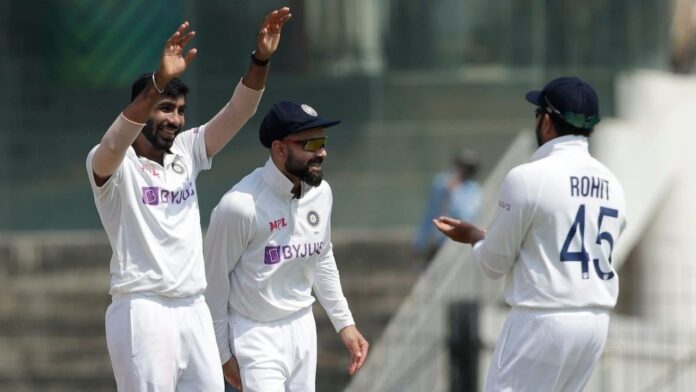 Even in full-blown wars, the ace is only unveiled in special scenarios. Scenarios which can’t be unlocked with anything but the X-factor, the special weapon that holds the audacity to be a differentiator, a differentiator needed when the run-of-the-mill stuff can no longer work.

Jasprit Bumrah is that precious jewel, the X-factor, the special weapon, the differentiator in Indian cricket. The skills, the temperament, the confidence, he is one of the best that Indian cricket have had in ages. He’s arguably the best pacer across all formats in world cricket at the moment.

Short run-up yet great momentum. A chutzpah-laden jump, whiplash action from hyperextension, raw pace, dipping slower balls, killer yorker, wide-angle of attack. An ability to move the ball both ways, with accuracy and control, the deceptive change of wrist. And above all, a sharp brain, to work out a batsman’s technique, play with his head, and attack where it hurts the most. He’s GOLD for India. A bowler, who should be wrapped up in cotton wool and preserved.

There have been great batsmen in the country, but very rarely as good fast bowlers. And that is why there is a greater need for India to be more cautious with him than others. No other bowler in the country walks into the XI across different formats, different conditions, and different countries but Bumrah. But that also means he is likely to be exposed to far more cricket than he ideally should be. And that is precisely where India will need to be careful.

Given the team’s fast bowling resources for Tests in India, there is a strong case to not play the 27-year-old in home conditions at all. Even his selection for the ongoing Test series against England didn’t make much sense given the amount of cricket he had already played.

He entered the home series having played 15 matches in IPL, three ODIs, one warm-up game, four Tests since September 19. He sent down 159.4 overs in these many Tests. He was even ruled out of the Gabba Test, which might well have been triggered as a result of his workload. In the hot conditions of Chennai, he had to bowl the most in an innings he ever had. No wonder the Indian pacer was rested for the second Test. But his selection in the squad itself was hard to comprehend, at least for me, given India have to play a lengthy white-ball series later, then there is the IPL and the much more important England tour lined-up. Not to forget, in the World Cup year, it will be great to try different combinations with Bumrah in the side so as to build up the team ahead of the megaevent than in it like the 2019 WC.

Let’s take a look at how Indian pacers have fared in the last five years in India with a minimum of 10 wickets:

India have quality pacers in Umesh Yadav, Mohammed Shami, Ishant Sharma, and now Mohammed Siraj, all of whom are good enough with reverse swing and the old ball. And given how much of a factor India’s batting and in particular spin bowling assumes, there is hardly any need of Bumrah’s presence. Why expose him when India already have enough firepower for familiar home conditions? So, they shouldn’t. Also, in all honesty, Bumrah in India doesn’t make as massive a difference as he does in SENA, for him to toil hard on flat, unresponsive Indian surfaces or the ones that are tailor-made for spinners.

However, in SENA conditions, he is invaluable given he leads the Indian bowling attack and turns into an X-factor, with his top-notch skills which are better than most others pacers as the below stats reflect.

Bumrah has the best bowling average for any Indian pacer in SENA nations in the last decade. He is the third leading wicket-taker after having made his debut in 2018 in South Africa, which shows he is a class apart. The difference in his bowling average with others shows the gulf between him and everyone else and his significance.

And when it comes to limited-overs cricket, he is unrivaled in the Indian team with his value arguably even greater than Virat Kohli given Rohit can make up for his failures but there’s no other pacer who comes even close to the diversity of the skills that Bumrah possesses. There is no better death bowler in the world than him forget India, where there is dearth of such options. And unlike Tests, India lack quality bench strength or even as many options in the colorful jersey. So, his value in white-ball cricket goes unabated just like SENA.

Bumrah is a generational talent. India are lucky to have a match-winner like him. Now, it’s on the selectors, team management, and captain whether they use him in the best manner possible or leave a room for injury with the amount of workload there is for an Indian cricketer, who happens to be a fast bowler, a regular across formats, and an IPL star. He certainly can’t be wrapped up in a cotton wool and be preserved but used as judiciously as possible. To ensure that his body doesn’t break down due to excessive cricket and he continues winning games of cricket in years to come.