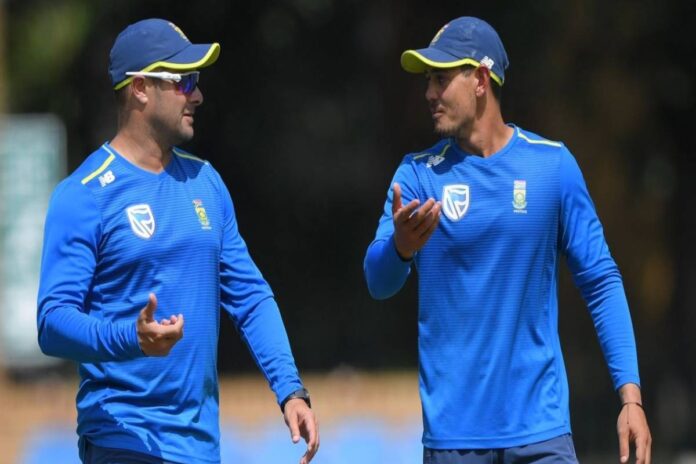 South Africa head coach Mark Boucher admitted that the management have put undue pressure on Quinton de Kock by making him Test skipper, and confirmed that the 28-year-old will be relieved of captaincy burden after the Pakistan series. De Kock, in December, was appointed as temporary skipper.

After Cricket South Africa (CSA) director Graeme Smith assured at the start of 2020 that Quinton de Kock will be kept far away from Test captaincy, the board took the bizarre decision of appointing the wicket-keeper the ‘temporary skipper’ for the home summer. De Kock got through the Sri Lanka series unscathed, but the undue responsibility put on his shoulders showed up in the first Test versus Pakistan, where South Africa convincingly lost a game they could have won.

In particular, captaincy has taken a toll on de Kock’s batting, with him averaging a hideous 11.25 in 4 innings as skipper, and calls grew post the first Pakistan Test to relieve the wicket-keeper batsman of leadership duties.

De Kock will finish the Pakistan tour as captain, but South Africa head coach Mark Boucher confirmed that the side will be appointing a new full-time skipper before the side’s next Test assignment.

“When we get back after this tour we’ve got a bit of time before our next Test series so we can sit down and make a good, solid call on who can take over from him and release him from that burden and try and get the best out of him,” Boucher said on Wednesday.

“It’s been tough on Quinny. If you’re not scoring runs it gets highlighted, especially if you’re a captain. We’re not that harsh on Quinny in this environment. We know that he’s a quality player and there’s a good innings around the corner for him. He has been given the extra burden of being captain and that can be tough and something he’s not used to.”

More than de Kock’s captaincy, however, what’s been the talk of the town in South Africa is Cricket Australia pulling out of a scheduled three-Test series. After requesting CSA to implement strict health and safety measures, and after the South African board agreed to meet the demands, CA pulled out of the tour in the eleventh hour, leaving the hosts infuriated. Boucher expressed disappointment over the cancellation of the series but rued the fact that South Africa bent backwards for Australia to meet their demands.

“CSA have expressed their disappointment and it’s no different for the players. I know there was a lot of planning going into the Australian tour back home. We haven’t really been a part of that, but it seems a lot of goalposts were being moved for that particular tour, for Australia,” Boucher said.

“For example, the one positive that came out of the bubble against Sri Lanka was the hotel that we stayed at (Irene County Club). We thought it was a great hotel for us as South Africans. It suits our needs and the cultural way that we are, being outdoors.

“And we even surrendered that to Australia. There’s probably a feeling that we were laying down the red carpet for Australia, which is frustrating at times. After all of that, it’s very disappointing and disruptive to our plans going forward.”

South Africa, post the conclusion of the second Test, will stay back in Pakistan to play three T20Is, all of which will be played in Lahore.