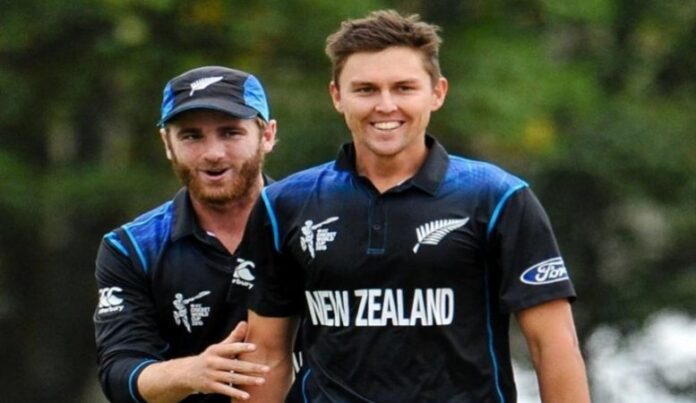 New Zealand skipper Kane Williamson had high praise for Devon Conway who played a match-winning knock of 99 and termed his knock ‘incredible’. Conway was also quite happy with his effort and expressed that all he focused was to settle in and then play his shots that came out well.

It was a Devon Conway show at the Hagley Oval, Christchurch today as he hammered 99* off 59 to help the Kiwis to 184, which proved too much for the visitors, Australia. His knock came when the Black Caps were in a tough spot as they were reduced to 19 for 3 after Daniel Sams struck twice while Jhye Richardson also took a wicket early. Conway stitched a big partnership with Glenn Phillips as they added 79 for the fourth wicket to put the Kiwi innings on track after which they flourished at the end. It was also the southpaw’s third consecutive 90-plus score as Conway has been in a scintillating run of form.

While it must have been heartbreaking for the 29-year-old to not reach his hundred after a brilliant knock, he would have been happy with the end result as New Zealand routed Australia by 53 runs to take a lead of 1-0 in the series. Winning skipper Kane Williamson felt it was a great knock by Conway given the pitch had some swing on offer.

“It was an incredible knock. We had a tough start with the bat and to see those partnerships in the middle led by Devon, unbelievable knock. To get 99 on a surface that was not easy to start with and we saw a little bit of swing in our innings as well. It was a great effort to get us to the 180-mark. We have seen a lot of breaks in the recent times so it was exciting to get back together and play cricket. We would like to do better moving forward but it was an incredible effort with the ball,” Kane Williamson said in the post-match presentation.

The experienced pair of Tim Southee and Trent Boult found swing early on and broke the backbone of the Aussie batting when they induced a collapse to leave them reeling at 19 for 4, after which they were never quite in the chase. Kane also added that there was a lot of swing on offer when the Kiwi pacers were bowling, which was unexpected.

“There was a bit of dew, it swung a bit and we weren’t expecting that. Obviously a significant day, ten years (since the earthquake at Christchurch) and there are a number of people that came to the memorial today. We are happy to put on a performance for the people tonight.”

Devon Conway was adjudged the Man of the Match and he opined that it’s very important to play strong shots and run well between the wickets.

“Wanted to get myself in and play strong shots and run hard. T20 cricket is a bit of up and down and there’s nerves every game and I’m happy to be scoring some runs. Pretty happy, good start to the series and we need to keep the momentum going. The key is to play strong shots and run well between the wickets. Naturally a little disappointed (for missing out on 100 off the last ball), probably a little more disappointed for Sodhi for not getting his fifer but happy to be on the winning side,” Devon Conway said, after being named the Player of the Match.

New Zealand have now gone 1-0 up in the five-match T20I series. The second game will be played at the University Oval on February 25 between the Trans-Tasman rivals.