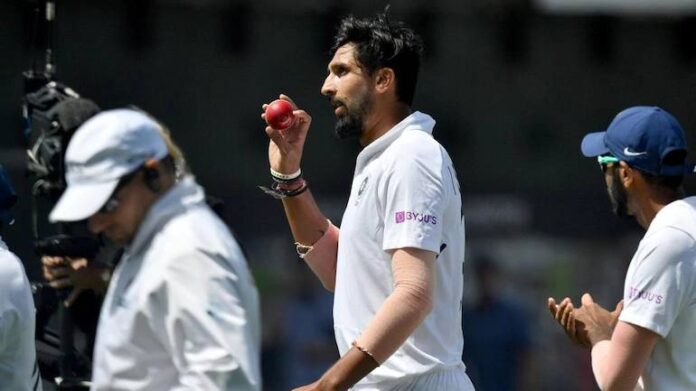 Ahead of his landmark 100th Test, Ishant Sharma reckoned that records are just numbers for him and instead stated that he will keep playing with the same aggression for the rest of his career. He also insisted that one key thing that he has learnt over the year is working on his fitness.

After making his return to the Indian setup in the first Test, Ishant Sharma has visible worked his way to full vigour and fitness in the Indian whites, after missing the entirety of the 2020/21 Australia tour. What remained the same, however, was his aggression, valour and his skill set, which was vividly on display during the ongoing four-match Test series against England.

But as time and again Ishant Sharma has suggested, pointed out and narrated, records remain as just numbers for him. Having started his career against Bangladesh, the lanky pacer has been an integral part of the transitional phase in Indian cricket, from a spin-friendly bowling attack to an all-round bowling attack. He insisted that his motivation in cricketing life would always be to help the team and not care about the records, ahead of his 100th Test appearance.

“2007-08, I was a youngster, I wasn’t thinking a lot and was just working on the areas that I used to bowl in domestic cricket. But as I started growing, I started becoming better. I changed my bowling according to the situation and conditions, as long as I play, my motivation would always be improving the team and helping them win. For me, records are just numbers and I just play to win, I don’t really care about the numbers. I just work on that and don’t really care about the records,” Ishant told reporters during the online press conference.

Ishant recalled the start of his career in Indian whites, suggesting that he will continue to play for the national team with the same aggression and intent that he has always done. He also stated that it was a different feeling to meet the Indian stars in the dressing room, back during his Test debut against Bangladesh, in 2007.

“Luckily for me, Ravi Shastri was the manager back then and he is my coach now, I was nervous back then, once you are in the ground, you don’t worry about the crowd. I was sweating too, the first thing you see in the dressing room, you look at all the stars and that itself was a different feeling for me. Playing in the 100th Test for me is just a number, I’m going to be playing with the same aggression and same intent as I have always done. I will continue till the day I show the same level of aggression,” he added.

During his early days, the pace attack was well spearheaded by Zaheer Khan, who went on to become one of the revered bowlers in the Indian pace arsenal. Ishant obliged and revealed that he learnt how to work on his ethics and fitness, which has helped him a lot during his 14-year-old ongoing Test career.

“Obviously it feels great to become a leader of the bowling attack. I have learnt a lot from Zak (Zaheer), his work ethic and fitness. That’s the one thing I have told everyone, keep working hard on your fitness and you will play longer.”

The 32-year-old also expressed that breaking Kapil Dev’s record as the most appearance for an Indian pacer in the longest format is something that he isn’t too concentrated on. He instead reckoned that qualifying for the World Test Championship would be his immediate goal.

“131 (breaking Kapil Dev’s record) is a long way ahead, right now I’m just thinking about the series and qualifying for the World Test Championship final. I have just one format right now, that is like the World Cup for me, to qualify for the final. So for me, I would equate that to a World Cup final or the championship.”

Despite all the highs and lows, in a career that saw him grow, break and reinvent himself as a leader of the new Indian pace attack, Ishant insisted that the career of an athlete is such – with highs and lows – which has helped him grow as a professional.

“I can’t really pinpoint at a point where my career turned around, it was always up and down. That’s the career of an athlete, there isn’t a high always, there are the lows that always surround it and that’s the beauty of it.”