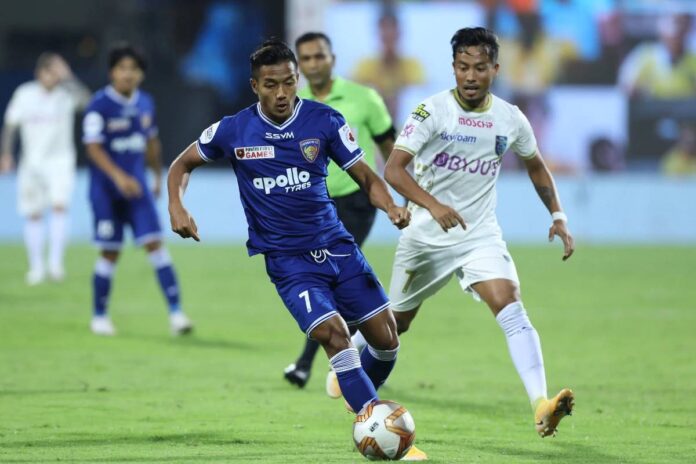 Chennaiyin FC had to walk away with one point in their last match of the season against a spirited Kerala Blasters FC side, with the final score reading 1-1. Fatkhullo Fatkhuloev opened the scoring for the ‘Marina Machans’ in the 10th minute, while Gary Hooper restored parity for the Blasters.

Kerala Blasters spoiled Chennaiyin FC’s desires of finishing the season on a high after holding them to a thrilling 1-1 draw in the Hero Indian Super League at GMC Stadium, Bambolim, on Sunday.

Fatkhulo Fatkhulloev gave Chennaiyin a lead in the 10th minute which was cancelled out by Gary Hooper’s 29th-minute goal from the spot. Csaba Laszlo’s side finished the season with 20 points from 20 games.

Chennaiyin got off to an electrifying start and created numerous chances in the opening minutes of the match. Anirudh Thapa fired a shot in the first minute forcing Kerala keeper Albino Gomes into an early save.

After nearly creating half-a-dozen chances, the Marina Machans were successful in breaking the deadlock. Bakary Kone’s header fell to Edwin Vanspaul, who played it over the left flank to find Fatkhulloev. The forward cut inside before unleashing a powerful strike that beat Gomes.

Kerala gained momentum in the second quarter and during this period, they pressed their opponents high, putting them pressure.

After sustaining a good spell in Chennaiyin territory, Kerala earned a penalty when Deepak Tangri was the culprit of handling the ball in the area. Hooper ensured he converted the spot-kick to get his team of level terms.

Hooper nearly put his team ahead before the break. Lalruatthara diverted Jeakson Singh’s lobbed pass into the path of Hooper at the edge of the box. However, his chip shot sailed over the crossbar.

The second half saw more balanced play as both teams had identical possession and passes. They matched each other with a much-relaxed game plan. Though there were chances being created, it was Vishal Kaith coming with a crucial save to keep the scoreline level.

Hooper’s cross at the far-post found Jordan Murray whose header was parried away by Kaith.

Chennaiyin were reduced to 10 men after Sipovic got his marching orders.

Prasanth Karuthadathkuni swiveled away from Sipovic. The defender unwittingly stamped Prasanth’s foot and the referee deemed that to be bad enough for a second yellow.

Having numerical advantage, Kerala kept searching for the match-winner. Jessel Carneiro struck a goal-bound shot from a distance, but Kaith’s brilliance denied the ball from entering the goal.

Chennaiyin defended well in the final few minutes of the game to end their season with a draw.