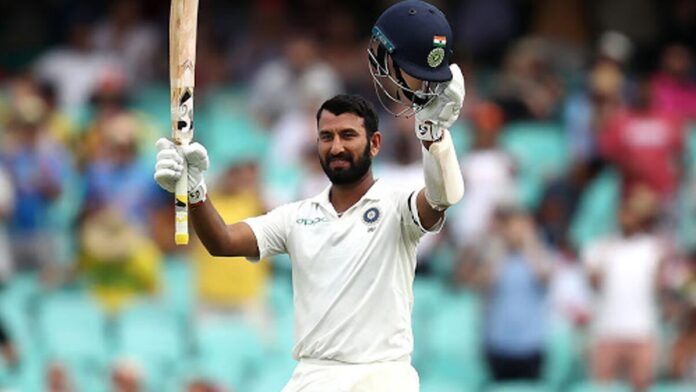 Cheteshwar Pujara, who on Thursday landed a 50 lakh IPL deal, asserted that the IPL stint will not interfere with his County plans and claimed that, even post the IPL, there will be a big window for him to play in England. Pujara further said that the Motera pitch is currently difficult to judge.

On Thursday, Indian batsman Cheteshwa Pujara – known as a Test specialist – landed his first IPL deal in over 7 years when the Chennai Super Kings purchased him for INR 50 lakh, and a ‘feel-good’ moment ensued when unanimous applause broke out at the auction venue the moment the right-hander secured the deal.

But while millions rejoiced at Pujara finally getting the big pay-day he deserved, there were also a fair few concerned that an IPL deal could disrupt the Saurashtra batsman’s plans to play County Cricket ahead of the five-Test series versus England later this year. Dates of the English County Championship usually overlaps with the IPL, and thus many believed that the CSK-deal could ultimately end up hurting both Pujara and India.

However, Pujara, speaking in a virtual press conference earlier today, rubbished those claims. The 33-year-old insisted that he will still have plenty of time to play County Cricket once the IPL ends, and added that he is delighted at the prospect of finally returning to the T20 extravaganza after a seven-year hiatus.

“First of all, I’m really glad to be a part of the IPL. It’s good to be back again. But at the same time, talking about County Cricket, I’ll still have enough time before we play the England Test series,” Pujara said in a virtual press conference on Saturday.

“So once IPL gets over there’ll be a window where I can play a few County games. But that call I’ll take once the IPL gets over, or mid-way through the IPL. But there’ll be enough time to play some county games. We also have a couple of practice games before the Test series. So there’s plenty of time to play County Cricket, but it’s always good to be back in the IPL.”

Playing County Cricket might help Pujara get acclimatized to the swinging conditions in England, but there is a good possibility that he and the Indian side could encounter similar conditions in three days’ time in the third Test in Ahmedabad. The second Test saw the two teams play in a rank turner, but owing to the pink-ball factor, Pujara said that it was ‘very difficult’ to gauge and predict how the pitch might behave.

“We still have 3-4 days to go for the Test so a lot could change. But looking at the pitch, it looks like a decent wicket. It’s difficult to predict anything at this stage – considering we’re playing with the pink ball. It’s a different ball game if we’re playing with the red ball, but with the pink ball, it’s very difficult to judge or assess anything before the match begins.”

The 33-year-old, however, claimed that team India expects the arrival of dew on a daily basis in the third session under lights.

“There might be some dew in the last session. But guys have played cricket with the white ball and many of the white ball games you expect dew in the second half of the game. So our bowlers are used to it and even as batters we’ve played some games with the pink-ball. So it could be there in the third session, but how much, we’re not sure. As the game progresses, we’ll have a better idea of it but yes, we are expecting some dew in the last session.”

The hosts registered a comprehensive victory in the second Test, but they were still dominated by the left-arm-spin of Jack Leach, who clinched 6 wickets in the game. Leach, in fact, has also had the better of Pujara in this series, having already dismissed the Saurashtra batsman twice. Pujara admitted that Leach has been bowling exceptionally well, but insisted that it is only a ‘matter of time’ before the Indian batsmen start playing him better. The 33-year-old claimed that the last two Tests are an opportunity for the Indian batsmen to show that they are very good players of spin.

“One has to be very confident as a batsman and I feel that with my preparation, and with the way I’ve played in Indian conditions, it’s a matter of time. I started off well and had a couple of dismissals which I did not like, but overall, most of the Indian batters are used to playing spin and we just need to show that we can do that again and again. The next two matches are an opportunity for us to play well against our spinners.”