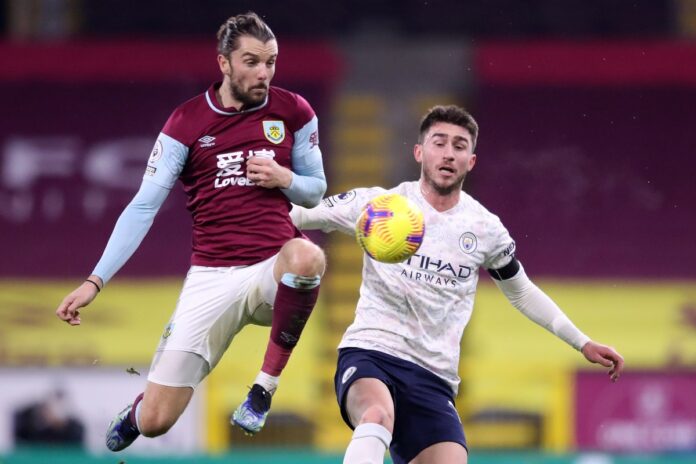 Amidst rumours that he is unhappy with his game-time, Aymeric Laporte has confessed that while he is happy at the moment, he will make a decision between now and the end of the season. The former Athletic club defender has struggled for game-time this season with just seven league appearances.

When Manchester City signed Ruben Dias, many expected the Portuguese center-back to partner Aymeric Laporte and marshal the club’s defense for years to come. But that hasn’t been the case because while Dias has taken to the English league like a duck to the water, Laporte has struggled for game-time this season. That is partly because the Frenchman spent a lot of time recovering from an ACL injury and a bout of COVID-19 which has affected his game-time.

It has, however, allowed John Stones the time to rediscover his best with the Englishman’s partnership with Dias now the main pairing for City. That has seen Laporte admit that he would like his game-time to change but he is happy for the moment. However, the Frenchman further added that he will make a decision at the end of the season which will depend on his game-time.

“At the moment I’m here, I’ll play, we’ll see what happens. I’m happy at Manchester City, I always thought I’d spend many years here. I hope that will happen. I will see what happens between now and the end of the season but for now I’m happy,” Laporte said, reported Goal.

The Dias-Stones partnership has, however, transformed the club’s defense completely which has seen them fly on a run of thirteen successive victories across all competitions. Not only that, goals have started to fly in and it saw Laporte admit that he is not sure “what we changed”. The defender further added that the club are happy the way things are going and are looking to keep it like that.

“I don’t know what we changed, the one thing we have done is winning every game. We’re happy and we will try to keep on this way. It’s important when you score. If you don’t score you don’t win. We have to keep this rhythm, keep not conceding many goals and try to score more than we concede,” he added.