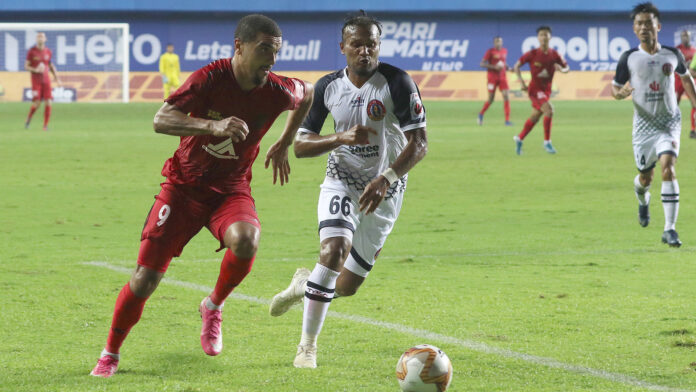 On Tuesday, East Bengal will go head-to-head against North East United at Fatorda Stadium.
NorthEast United could move back into the top four places with a win. East Bengal’s season is over, but they could put a dent in the Highlanders’ finals hopes.
NorthEast have been in good form, scoring three goals in their last two matches and they should have the attacking weapons to get the better of East Bengal.
East Bengal’s finals hopes were already dashed before they lost the Kolkata Derby 3-1 to ATK Mohun Bagan on Friday. A Tiri own goal pulled SCEB level at the break after Roy Krishna had opening the scoring for ATK. But David Williams and Javi Hernandez won it for Mohun Bagan.
Robbie Fowler’s side have struggled for wins in their debut season in the Indian Super League. They have won just three times and posted eight draws during the campaign to sit in ninth spot with two games left to play.
NorthEast United extended their unbeaten run to eight games with a last-gasp 3-3 draw against Chennaiyin last week. The Highlanders trailed 1-0 and 3-2 despite goals from Imran Khan and Deshorn Brown. Luis Machado then snatched a point with a 94th penalty.
It means NorthEast have now won four and drawn four of their last eight matches. Khalid Jamil’s side still have work to do in the race to the finals, having dropped to fifth place behind Goa and Hyderabad.
A win could lift NorthEast back into the top four, depending on Hyderabad’s result against ATK Mohun Bagan on Monday.
NorthEast United won the first-ever meeting between the sides in the Indian Super League 2-0 in December.
East Bengal’s Surchandra Singh put through his own net in the first half and Rochharzela sealed the win with a 91st minute goal.