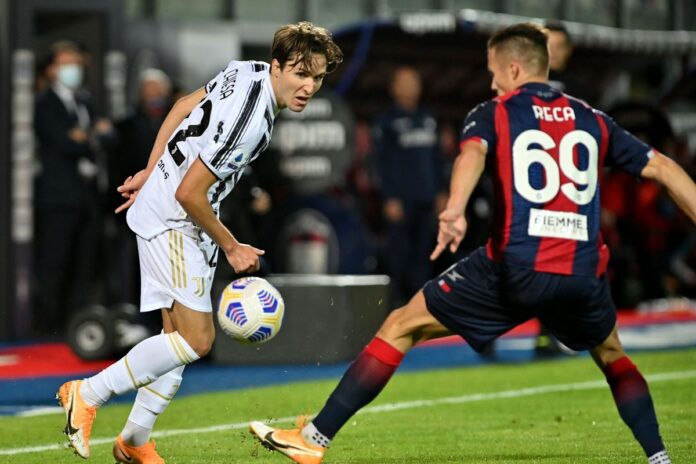 Reigning Italian champions Juventus will be in action on Monday night in Serie A as they play hosts to relegation battlers Crotone in Matchweek 23, with an aim of closing the gap to the top.
Juventus have been hit with a fresh injury problem as Giorgio Chiellini is ruled out after coming off with a calf issue against FC Porto. Fellow defender Leonardo Bonucci also remains unavailable as do Juan Cuadrado, Paulo Dybala and Arthur Melo. In addition, Adrien Rabiot is suspended for the contest, complicating matters for Andrea Pirlo.
Wojciech Szczesny could be taken out of the limelight following a disappointing display against FC Porto. In his place, seasoned campaigner Gianluigi Buffon ought to start in goal. With both Bonucci and Chiellini out, Matthijs de Ligt and Merih Demiral become certain starters at the heart of the Juventus defence.
Danilo and Alex Sandro ought to be the two full-backs, although the former will tuck in alongside the three centre-backs more often than not while the latter pushes forward to support the attack.
Crotone manager Giovanni Stroppa will be without the serves of Ahmad Benali for the trip to Turin while Giuseppe Cuomo also remains an absentee while Koffi Djidji isn’t part of the travelling party either. The visitors are expected to set up in a 4-3-1-2 formation in front of goalkeeper Alex Cordaz, against the reigning champions
Luca Marrone and Vladimir Golemic ought to shield the goalkeeper as the two centre-halves flanked by Andrea Rispoli and Arkadiusz Reca, both of whom are expected to stay compact at the back and deprive the hosts of any space to work with, in the attacking third. Jacopo Petriccione will sit deep in midfield and provide further protection to the backline, with support coming from Nicolo Zanellato while Milos Vulic ought to complete the three-man central midfield unit. The creative onus will fall on the shoulders of Junior Messias, who will look to operate in the hole behind the two forwards, who should be Adam Ounas and Samuel Di Carmine, with Simy also an option that manager Stroppa might consider.
Juventus have failed to win three games in a row now, losing their last two. However, in Crotone, they will be facing a team that cannot win to save their lives at the moment. Indeed, the bottom feeders have lost four in a row now and have been poor on the road.