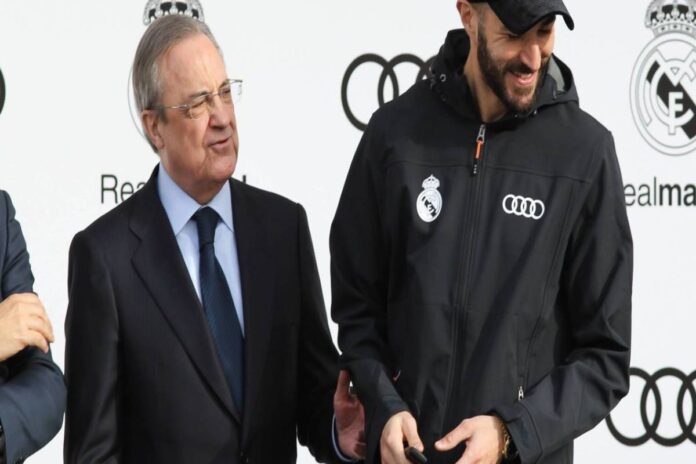 Real Madrid president Florentino Perez has admitted that he is bemused at the fact why Karim Benzema doesn’t play for the French national team despite thriving for Real Madrid. The 33-year-old has flourished over the last five years for Real Madrid winning numerous trophies and accolades.

Despite winning the 2018 World Cup and reaching the 2016 Euro final, France have had a dark cloud looming over them in the form of Karim Benzema. The Frenchman has made only 81 appearances for the national team but his last one came in August of 2015. Since then, the 33-year-old hasn’t played after he was accused of blackmailing team-mate Mathieu Valbuena over a sex tape, in which the Olympiacos midfielder appeared.

While Benzema was reportedly cleared, Didier Deschamps has refused to call up the Real Madrid forward despite calls from across the world. The latest, in a long line, is Florentino Perez as he admitted that the entire situation is a “huge mess”. The Real Madrid president further added that he “doesn’t understand why Benzema does not play” for France especially since Benzema represents “values such as professionalism, commitment, humility”.

“It’s a huge mess. To deprive yourself of the presence of one of the best players in the world is a situation that no one can understand. I would like to highlight his behaviour, which has been exemplary. He is appreciated greatly by his team-mates,” Perez said, reported Goal.

“Benzema represents values such as professionalism, commitment, humility. I would like to point out that Benzema has never been sent off from the pitch. We are very proud of him. All I can say about Karim is positive. That’s why I don’t understand why he does not play in the France team.”