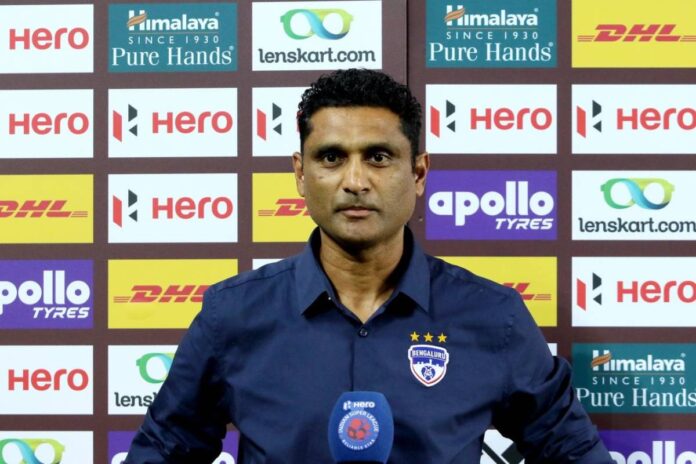 Bengaluru FC will miss out on the services of Erik Paartalu and Juanan in their upcoming fixture against SC East Bengal this Tuesday evening at the Tilak Maidan. The ‘Blues’ are currently placed at the eighth position in the league table, having collected 15 points from 14 matches.

Interim Head Coach Naushad Moosa expects a tough test when his Bengaluru FC side takes on SC East Bengal at the Tilak Maidan, in Goa, on Tuesday. The Blues, yet to pick up a win this calendar year, will be up against a Robbie Fowler-coached side that won courtesy of a Matti Steinmann goal in the reverse fixture.

“If you watch their last game, East Bengal dominated FC Goa in the second half. They have been improving with every passing game. It’s true that they are not converting the chances they have been creating, but that does not mean we will be relaxed. With the way Bright [Enobakhare] and [Jacques] Maghoma have been doing recently, it won’t be easy. We know we will have to be at our best to get the win.”

The Blues were five minutes away from a clean sheet and the first win under Moosa against Hyderabad FC. Instead, two goals were conceded in the dying minutes to see the points shared. Despite the setback, the mood in the camp remains positive one as several teams remain in contention for the playoff spots.

“Losing the lead against Hyderabad FC was not easy. We have six matches left in the League stage and there’s a positive mood in the camp right now. Many teams are closely packed and in contention for the playoffs and one win can push us up the table. That’s going to push us towards getting better results and the players are motivated and focused on the games ahead.”

Bengaluru will miss the services of Erik Paartalu, after the Australian picked up his seventh yellow card of the campaign. Meanwhile, Juan Gonzalez, who pulled up with an injury in the previous clash, will also be missing from the Blues’ side. “Though we will miss Erik and Juanan, we are happy with all the Indian players we have and they have a chance to prove themselves tomorrow.”

Coupled with Dimas Delgado’s absence, this could mean that a team packed with Indians, including several youngsters, could take the field against East Bengal on Tuesday. “We have been aiming to give youngsters a chance, but we will do so while ensuring there’s a right balance on the pitch. Leon [Augustine] will start and two or three new faces may also join him. Parag [Shrivas] has been improving and that’s what it is all about; giving the kids the experience that will help them build confidence going into next season.”

Kick-off between SC East Bengal and the Blues is scheduled for 7.30 pm on Tuesday, and will be telecast live on the STAR Sports Network, Hotstar and Jio