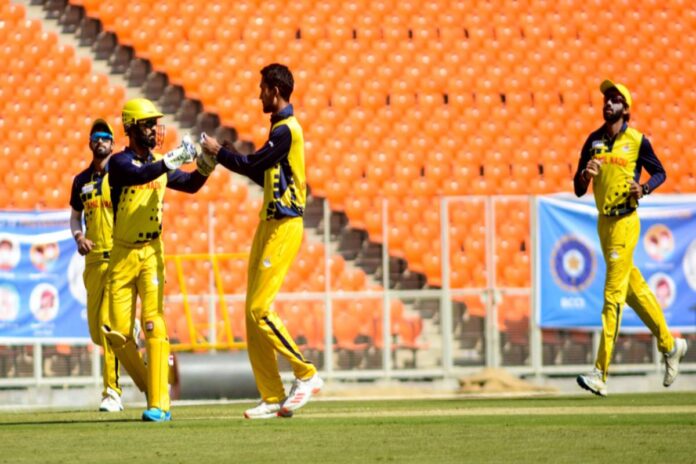 Tamil Nadu skipper Dinesh Karthik, who led his side to the Syed Mushtaq Ali Trophy triumph on Sunday, heaped praise on TN’s youngsters and claimed that there will be more players from the state soon donning Indian colours. Tamil Nadu downed Baroda by 7 wickets to lift their second SMAT title.

On Sunday at the Motera Stadium in Ahmedabad, Tamil Nadu successfully avenged the heartbreak in the final of the 2019/20 season to lift their second Syed Mushtaq Ali Trophy title. Unbeaten all tournament, the Dinesh Karthik-led side produced a clinic with the ball on a dry surface to restrict Baroda to 120/9, before chasing the target down with two overs and seven wickets to spare to become champions. As was the case all tournament, in the Final too it was the TN youngsters who took their game to a new level to take the side home, with the duo of M Siddharth and Hari Nishanth starring with bat and ball to ensure victory for the side from the south.

In the past fortnight alone, both Washington Sundar and T Natarajan got their Indian Test caps, and on the back of TN’s SMAT triumph, skipper Dinesh Karthik is confident that there will be more young superstars from Tamil Nadu representing the Indian national side.

“Really hurt us last year. We played some really good cricket and we have been pretty consistent throughout. Just the fact that there are players like Natarajan and Washington Sundar in the Indian team, those guys were around last year playing this tournament for us. Just to see those guys go there, I am sure there’ll be few more going from here,” Karthik said in the post match presentation on Sunday.

“There have been so many good performances through the season. We are able to produce cricketers to play for the country, that’s always a sign of a team doing well.”

Now 35, Karthik has donned the role of a mentor of late, but that hasn’t stopped the skipper from being the nucleus of the side. In the recently-concluded SMAT, the wicket-keeper batsman scored his runs at an average of 61.00 and a SR of 157.75 and played a vital hand in the final to tilt the game in Tamil Nadu’s favour. Karthik said that he was keen to carry TN to greater heights, but was also hopeful of finding his way back into the national side through his domestic exploits.

“You understand your cricket over a period of time, I am very keen on taking our state cricket forward and playing for the country is always on my mind.”

The knockout games in SMAT 2020/21 were played in the spectacle that is the now-renovated Motera Stadium in Ahmedabad – which has a capacity of 110,000 – and both the stadium and the wickets didn’t disappoint. The pitches, in particular, provided a great contest between bat and ball, exemplified by the wicket in the final, which had ‘something’ for everyone. Karthik hoped for the venue to soon be host to an IPL game.

“This is the biggest stadium in the world. The outfield and the wickets throughout were fantastic. To have an IPL game here is going to be fantastic. Everything looks big here.”