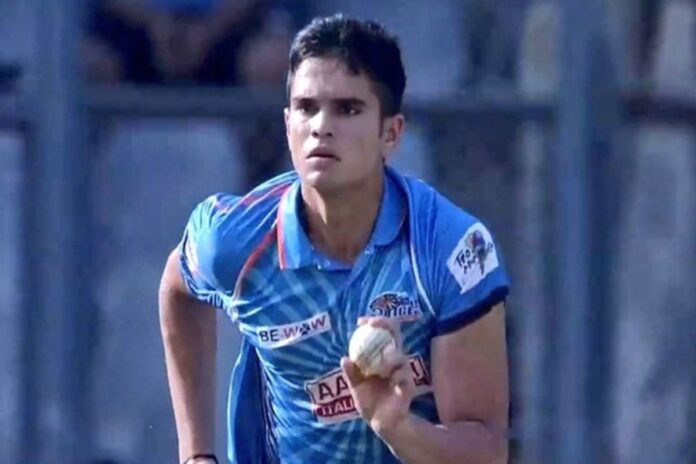 When your surname is Tendulkar, an often-riveted discussion is bound to take place. Arjun wouldn’t have wanted any of this, but when you born with a silver spoon in your mouth, this is sure to make your life and every little incident attached to it – a tragicomedy of sorts.

Arjun Tendulkar’s selection in Mumbai’s Syed Mushtaq Ali side has raised more than a few eyebrows, with many on social media were quick to point out his surname as the “major” reason behind him getting the nod ahead of many “deserving” candidates. While the truth of the matter is left for interpretation, it is paramount to notice that a youngster, with a bagful of dreams and a truckload of expectations, finds himself at the crossroad of proving himself on every single moment for no fault of his own.

Arjun is a left-arm pace-bowling all-rounder – the likes of which are scarce in India. An uncooked Khaleel Ahmed, with just a few U-19 and domestic match experiences in his arsenal, straight up found himself sharing the new ball with Jasprit Bumrah in the Indian team. And not so long ago, Jaydev Unadkat and Aniket Chaudhary were roaming in the corridors of Indian cricket. Not only the angle that they generate outfoxes the batsmen, but also the originality of it made them such an invaluable commodity – something India have been desperately searching for since Irfan Pathan and the inimitable Zaheer Khan.

For the sheer rarity and impact of the craft, Arjun was always going to be fast-tracked and that doesn’t have anything to do with his surname. But that was not even the story. Or rather long-off from it, which is the worry!

Neither has Arjun been fast-tracked to the Indian team or to the Indian Premier League, which would’ve been completely fair, but Arjun was just picked in his state team after graduating from the age-group circuit. A few years ago, he was picked in the side for the unofficial Dhruv Pandove U-19 Trophy in Mohali, where his performance grabbed eyeballs and he made it to the Mumbai Vinoo Mankad Trophy and then subsequently to the Indian U-19 team for the tour of Sri Lanka.

Being the son of Tendulkar comes with its own perk. He has a state-of-the-art training facility in the UK, his personal coach in Subroto Bannerjee, and can dial anyone he wants for advice on the sport. While that is an elite-class aspiration, the facility doesn’t qualify as nepotism. Ranbir Kapoor is one of the greatest actors of the generation but nepotism is a word one can never detach away from because he was born into it.

It comes down to the systematic balance, of affluence and opportunity but when talent finds the middle-ground, it is hard to contain. In the case of Arjun Tendulkar, sadly, most of our opinions are driven by a strong prejudice and a moral high ground. Nothing is remotely concerned with reality. Journalist Rajdeep Sardesai, son of legendary Indian cricketer Dilip Sardesai, spoke about why cricket doesn’t really care about lineage.

“You can be (Amitabh) Bachchan’s son or from Dhirubhai Ambani’s family but being a test cricketer’s son does not promise a spot in the team. cricket is now increasingly driven by merit and merit alone: you cannot play for India unless you are one of the eleven most talented players in the country. The sport has cut across all class, caste, regional, religious barriers. That’s why cricket is so attractive and represents the democratic spirit of a changing India. To my mind, cricket symbolizes an aspirational India driven by merit, not privilege or lineage.”

While Rajdeep has nailed the opinion right, it also remains an evident fact that son of former Indian great Sunil Gavaskar, Rohan never made it to the Test setup even though he had a lineage attached to him. Rightfully so, Rohan was far away from a product of nepotism, his statistics can speak for their own – 6938 runs at an average of 44.19 while having picked up 38 wickets at an average of 50.31. If lineage did exist on the greatest stage of Indian cricket, wouldn’t Rohan have been one of the most capped Test cricketers now? At least statistically, he deserved a place but never got one!

Arjun Tendulkar might not have been as talented as his father was – who is anyway? – but from the toil, it seems like he has the courage and willpower to rise above the heat and put out his own history. He has backed that up in the first Intra-Squad practice game, squaring up two batsmen in the process before returning with numbers of 4-0-22-2 – a figure good enough to give you a spot in the state side. Remember, he has got the camp on the basis of his performance for Mumbai U23s in the Col C.K Nayudu Trophy. He was a regular in many Indian net sessions and was praised for his uncanny accuracy as well.

It is imperative – however, unfair – that Arjun will have to be extremely talented and then some more to be able to move away from the preconceived notions. But the fact remains, India don’t have a surfeit of left-arm pace bowler, so if there is anyone holding a ball on the sinister, he is a ray of hope. And you like it or not, Arjun is a hope, who promises a hell lot more. We need to be patient and wish the youngster well, instead of banishing his achievements and branding it as a product of ‘nepotism’.