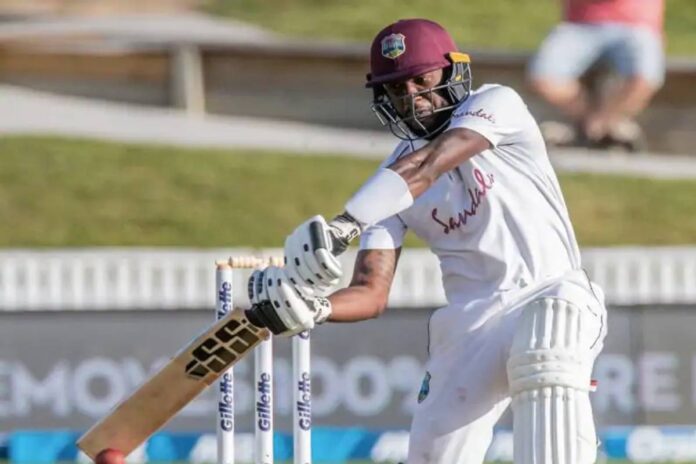 Hard-hitting West Indies Test batsman Jermaine Blackwood feels India’s Rishabh Pant is someone who puts a lot of pressure on the bowlers. He also revealed that he had a conversation with Indian skipper Virat Kohli when India toured Windies last time and it gave him a lot of confidence.

India’s wicketkeeper batsman Rishabh Pant has been the talk of the town since his heroics in the Australia triumph. He emerged as the leading run-getter in the Test series for India, which they won 2-1 with a depleted side. Pant’s match-winning abilities were always known but his inability to put up good displays in international cricket consistently had put him under a lot of scrutiny. After a good cameo in Boxing Day Test, the southpaw took his game to the next level in SCG where he made an aggressive 97 on final day of the game taking Nathan Lyon to the cleaners. While in the series-decider at Gabba, his unbeaten 89 helped India breach Australia’s fortress as they chased down 328.

West Indies batsman Jermaine Blackwood has opined that he was keenly following the Border-Gavaskar trophy and was rooting for Pant as he was sure that if he stays for long, India will win. He also added that he also plays a similar brand of cricket as India’s gloveman.

“I was following the series between India and Australia. During the fourth innings with an hour left, I was saying to myself that once Rishabh Pant is there, you’re going to win. I think we have the same batting style. He looked to score and a player who puts bowlers under pressure. That’s the same way I bat. I was just rooting for him because I know he was under a little bit of pressure. He is a very cool guy,” ESPNCricinfo quoted Blackwood as saying, reported TOI.

Blackwood also revealed about his conversations with the Indian skipper Virat Kohli as he sought advice from him on how to play big knocks. And Kohli’s advice to play as many balls as possible has even helped him, he said.

“I talked to Virat Kohli a few times as well on social media. The last time India toured the Caribbean, I had a chance to talk to him in Jamaica when I was there subbing,” he said, “So after the game, I just had a small conversation. I asked him about how I have a lot of half-centuries and only one century. He just said, ‘What will you do when you score a century? How many deliveries did you face?’ I said I faced 212 balls,” said Blackwood.

“He said, ‘That’s it, once you can bat some balls, you’re going to score runs’. So I took a big thing from that. After that conversation, I tell myself that once I can bat over 200 or 300 balls, the way I bat, I can score runs regardless of who I am playing against or where I am playing,” he added.

The Windies middle-order batsman had a good series in England where he helped the team won a Test while in New Zealand, he averaged 54 and has been in terrific form of late. He attributed it to working hard on his mental space and training when he was not part of the team.

“I think I have been out of the West Indies team for almost three years. On the sidelines, I did some work on my mental space. I trained twice a day and hit the gym every day. I put in a lot of hard work to be as fit as possible. I tried to come back as strong as possible. You can see the results. I am better at my shot selection, I am starting to understand my game very well, and I want to continue to do the same going forward,” said Blackwood.

West indies will play a two-match Test series in Bangladesh starting from February 3.