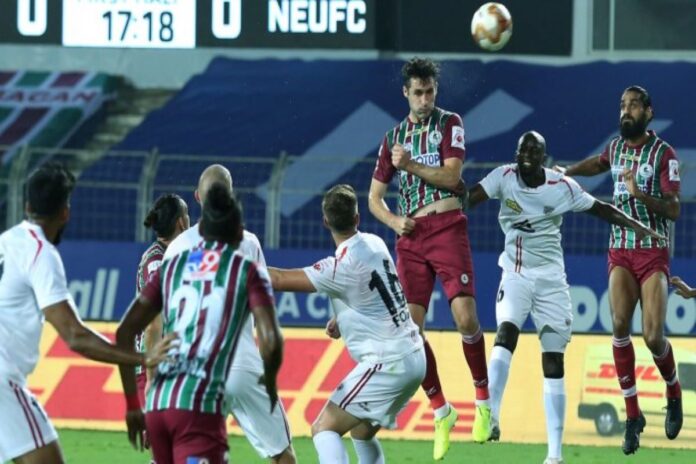 NorthEast United will hope to utilise their home advantage to help bridge the gap to opponents. The home side are currently 9 points behind ATK Mohun Bagan.
NorthEast United in their previous game match away at Jamshedpur (placed 8th) that ended with a 2-1 victory. The spoils were shared after 90 minutes before that, a home game that ended 1-1 versus Bengaluru.
World class coaching! That was the thoughts of G. Nus when Deshorn Brown scored the winning goal after coming on as a substitute in the 46th minute.
NorthEast are traveling soon after this match as the Indian Super League match at Mumbai City awaits in four days.
NorthEast are certainly not overdoing their scoring at home in league matches, having created 6 goals in 6 games. NorthEast’s goalkeeper has had to pick the ball out of their own net 6 times. For more goal stats, check the Statistics tab above.
The story so far for the visiting team, who have the most clean sheets (8) in Indian Super League, on their Indian Super League travels is 2 wins, 2 draws and 1 defeat. Visiting ATK Mohun Bagan has seen their last two away games both end with a tied score and one point each.
Mohun are travelling after their nice 1-0 home win in the Indian Super League against Chennaiyin (placed 6th). Before that, Mohun travelled to Goa and returned home with a draw after the game finished 1-1.
David Williams came off the bench to score the winning goal in the match against Chennaiyin last time out, making the manager A. López Habas feel like a tactical genius. Late drama in the previous game, when David Williams scored the winning goal one minutes into stoppage time to defeat Chennaiyin.
Scoring goals is the main ingredient in creating success in football, and not only at home. So far Mohun have scored 5 goals in 5 league games away. It’s not easy to score on Mohun as they have only conceded 3 goals from these away games.