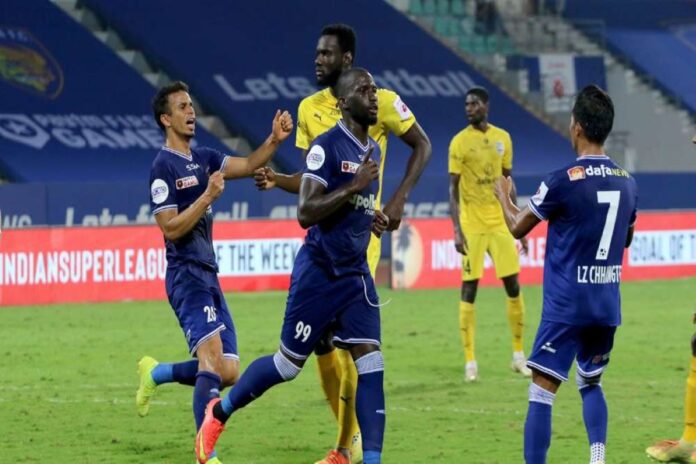 Chennaiyin FC eked out a point from their match against league leaders Mumbai City FC after a 1-1 result in the 71st match of the 2020-21 Indian Super League (ISL) at the GMC Bambolim Stadium in Goa.

The opening 45 minutes were nothing short of entertainment with both the sides creating ample chances and testing each other. However, Mumbai proved more clinical than their opponents in the attacking third and deservedly led at the break.

Chennaiyin dominated the opening exchanges and created a chance as early as in the second minute.

Though the Marina Machans were dominant in the early stages of the half they weren’t as clinical enough to convert their chances. Eventually , Mumbai City FC broke the deadlock through a set piece.

After Amey Ranawade’s throw was cleared away poorly, Rowllin Borges found Bipin Singh on the left. The winger delivered a delicious cross at the far post for Ogbeche, who thumped a brilliant header to notch his fifth goal of the season. That was his 32nd Hero ISL goal as he overtook Marcelinho to climb to third on the all-time scoring charts.

Chennaiyin began the second half strongly in search of an equaliser but neither side was able to fashion clear-cut chances as the game progressed.

Chennaiyin FC looked out of ideas and it was reflected by Edwin Sydney Vanspaul’s free-kick which sailed into the stands.

Later in the game, Mumbai went onto concede a silly penalty after Ahmed Jahouh tried to dribble past Jakub Sylvestr instead of taking a direct goal-kick. Chennaiyin FC’s top-scorer Esmael Goncalves slotted in the penalty with utmost confidence to come up with the equalizer.

Chennaiyin FC could have gone all out for the winner but Jakub Sylvestr was taken off for Mumbai City FC. The opposition showed their intent clearly with as many as four substitutions in quick succession, but a goal-scoring opportunity couldn’t come their way.

In the end, the match ended as an entertaining stalemate.