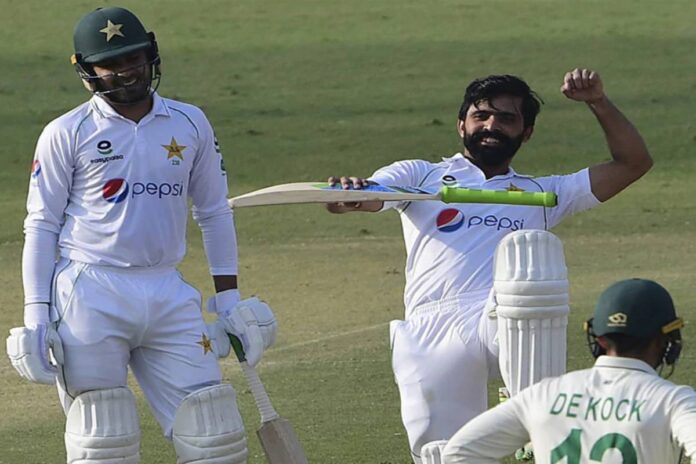 Pakistan skipper was full of praise for his side after their emphatic win over the Proteas and lauded the pair of Fawad Alam and Azhar Ali for their brilliant partnership to revive their innings in teh first innings. He also praised debutante Nauman Ali for showing his domestic experience.

Karachi played host to the first Test between Pakistan and South Africa after the two nations resumed their rivalry in Pakistan shores after ages and it turned into a memorable win for the hosts. Chasing 88 runs, the Babar Azam-led side won the game with seven wickets after their brilliant display in all departments, completely dominating the visitors and winning comprehensively despite losing the toss.

One of the keys to Pakistan’s victory was scoring 378 in response to South Africa’s first innings total of 220. But it wouldn’t have been possible if not for the pair of Fawad Alam and Azhar as they stitched together a partnership of 94 runs for the fifth-wicket in the first innings after Pakistan were struggling at 27 for 4 with Proteas on top of them. Fawad registered his first home ton while Azhar made a fifty.

Winning skipper Babar Azam, speaking in the post-match presentation, credited both Fawad and Azhar for their great show with the bat.

“Credit to the players who have worked so hard. Wicket was quite slow. Our plan was to bat first, but we were able to adjust our plans. I spoke at the toss of how important partnerships were. The way Fawad Alam and Azhar Ali revived the innings was so brilliant, ” Babar said, reported TOI.

The newly formed Pakistan spin duo of Yasir Shah and debutante Nauman Ali also did wonders as they both picked up seven wickets each in the Test. Nauman Ali, playing his first Test, showed no nerves whatsoever and had a smooth transition to the top-level as he even picked up a fifer in the second innings of South Africa. Babar praised the spin duo.

“Then Nauman Ali and Yasir Shah bowled really well aided by the fast bowlers. South Africa are a quality team, their pacers are very good. The way Nauman Ali played on debut, he showed his first-class experience,” Azam said after the match.”

Pakistan now lead the series 1-0, with one more match to come.