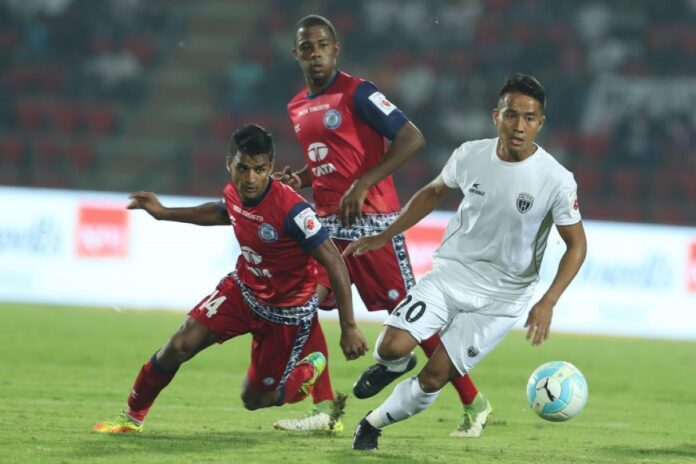 It was Jamshedpur who created the first big chance of the game in the 8th minute but NEUFC custodian Subhasish Roy Chowdhury denied them the opener.

In the 36th minute Federico Gallego delivered a lovely corner and Mehta rose above his marker at the near post to head the ball into the net.

NEUFC were the better side in the opening half, dominating possession and creating goal-scoring opportunities. They deservedly went into the break with a one-goal cushion, which could have been more, but for some crucial saves by JFC goalkeeper TP Rehenesh.

Jamshedpur started strong in the second half, pushing their opponents on the back foot.

However, a defensive error saw them concede again. Isaac Vanmalsawma, brought on at half-time, gave the ball away after a sloppy pass. Gallego received the ball from Machado and threaded a through pass for substitute Brown, who slotted it past Rehenesh.

Jamshedpur had a chance to cut down their deficit after Chowdhury put himself in trouble, courtesy of a miscued goal kick. The ball was intercepted by Valskis, who made a run into the box and shot on goal but Chowdhury redeemed himself with a crucial save.

Coyle’s side received a glimmer of hope late on in the game after captain Hartley scored through a corner, which was his first for Jamshedpur. They continued to test NEUFC and could have bagged a dramatic equaliser in injury time but Valskis fluffed the chance.

The result ends NEUFC’s seven-game winless run and propels them to fifth on the points table.