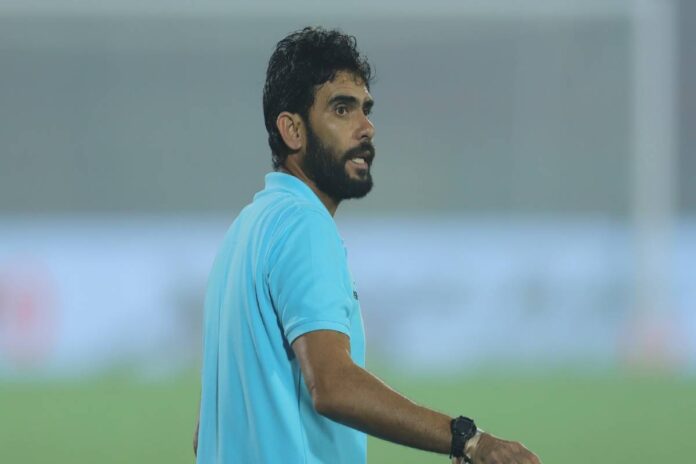 Northeast United FC interim head coach Khalid Jamil lauded the efforts of playmaker Lalengmawia during their 2-1 win over Mumbai City FC last evening. With the third consecutive win, the ‘Highlanders’ have now climbed up to the 4th position in the table, with 21 points from 14 matches.

Mumbai City FC had lost only one match this season before Saturday evening – to Northeast United in the opening stages of the league. While Mumbai City FC had gone on to cement their position as the top team in the league, Northeast United FC faded away as the season progressed. It was a few days ago that the ‘Highlanders’ sacked their former head coach Gerard Nus and appointed Khalid Jamil to fill in the gap.

The change took a course for the good as they won consecutive matches following the Spaniard’s exit, but they hardly fancied their chances against a quality Mumbai City FC side. To everyone surprise, Northeast United FC’s Deshorn Brown scored two early goals and put them in the driver’s seat. Khalid Jamil entirely gave the credit to the players for Saturday’s win.

“As I said, it is because of the players. They’re working very hard. I just tell them to play their normal game. We got two early goals. We kept well. We finished the first half 2-0. They also played good. They have quality players. They also tried but we worked hard and got what we want,” said Khalid Jamil, after the win over Mumbai City FC.

“I don’t know about them. But we played hard. They’re on top of the league. Everyone was motivated. They know it will not be an easy game and that it will be a difficult one,” added the manager.

Lalengmawia, along with Khassa Camara played influential roles in the midfield, which all led to the memorable win. The former I-League winning coach lauded efforts of the Indian playmaking and stated that he is one of the best midfielders in the country.

“Frankly speaking, he is one of the best midfielders in India. I don’t need to tell him to do this and that. He always has the same energy and rhythm. Even during my playing career, I have never seen a player like him. I think he’s one of the best players,” remarked Jamil.