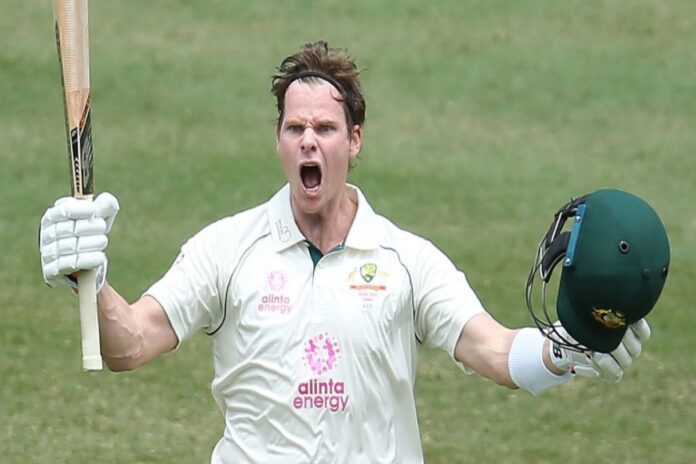 After enduring the leanest patch of his career in seven years, Steve Smith, coming on the back of scores of 1, 1*, 0 and 8, roared back to form at the SCG in the most domineering fashion imaginable, striking an immaculate 131 in the first innings before following it up with a vital 81 in the second. While there were shades of ‘vintage Smith’ across both knocks, what stood out, however, was the right-hander’s celebration post the century. Having brought up his first home ton in over three years, Smith vigorously celebrated with anger after getting to the three-figure-mark, displaying just how much the hundred meant to him, personally.

The celebration, many felt, exemplified the 31-year-old’s passion, but former cricketer Shane Lee has an interesting and worrying theory about the same. Speaking on his Afternoon Sport podcast, the 47-year-old expressed concern over Smith’s celebration and claimed that it indicated that the champion batsman was angry and frustrated. Shane, the brother of Brett, suggested that he saw the same anger in Smith’s eyes prior to the sandpaper gate, and urged the Australian board to keep an eye on the masterful batsman’s mental health.

“I’m really really concerned about some of our behaviour. Steve Smith scored a fantastic hundred in Sydney and the way he reacted afterwards, I thought, there’s a real anger there. It’s disturbing,” Lee was quoted as saying by Fox Sports.

“You wind forward to this test: I’m seeing the same signs (as before Sandpapergate). I’m seeing someone like Smith who is getting really, really angry. I’m feeling really worried about this guy.

“I really want Cricket Australia, or someone within that organisation to make sure this guy’s alright. Because he’s a champion batsman, and he’s not a cheat. We really need to look after these guys from a mental health perspective.”

Lee’s ‘sandpaper’ reference, however, had no connection to Smith’s rather controversial actions in the third Test, for which he was called a ‘cheat’. The right-hander, on Day 5, seemed to intentionally erase Pant’s batting guard by scruffing the crease, after which social media went into meltdown, before an extended footage of the incident vindicated him of any wrongdoing. Lee clarified that Smith wasn’t cheating, but asserted that the Aussie had no business being on the pitch when he was not batting.

“He wasn’t trying to cheat, but he shouldn’t be on the wicket,” Lee said of the scruff-gate.