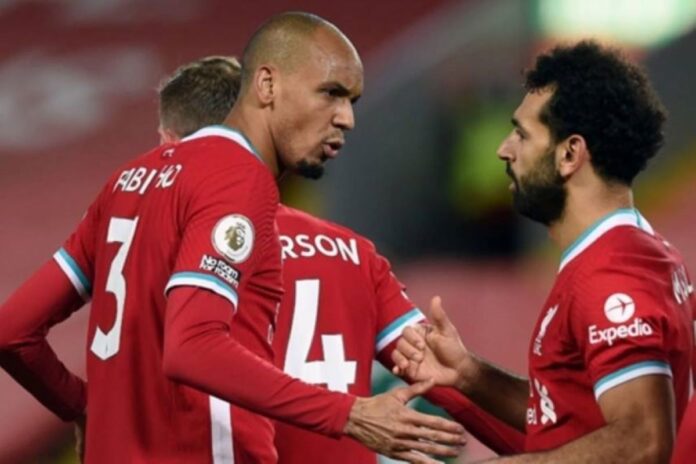 In light of recent rumours linking Mohamed Salah with a move away, Fabinho believes that the forward will always have rumours but admitted that Salah is happy at Liverpool. The 28-year-old is one of the best in the world and has two and a half years left on his current contract with the Reds.

Ever since Mohamed Salah commented that he would be open to a potential move to Spain with Barcelona or Real Madrid touted as his top destinations, the rumours have been non-stop. It has seen the 28-year-old forward heavily linked with a move away from Anfield although nothing has materialized as of yet. But that hasn’t stopped the rumour mill with questions about the Egyptian’s potential future being relentlessly floated about.

However, reports have indicated that Liverpool aren’t worried about too much, especially with two and a half years left on Salah’s £200,000 per week contract. That has been reiterated by Fabinho as he admitted that while the “big players will always have their names involved in rumours”, Salah is “very happy” at Liverpool. The Brazilian further added that the 28-year-old has only one thing on his mind right now and that is to help the team do well.

“Big players will always have their names involved in rumours. Salah plays for Liverpool, one of the biggest teams in the world. I think it’s normal to see his name linked to other teams, especially from different leagues. Anyway, I see him very happy here and pleased with his performances this season. He’s very demanding with himself, he wants to be the best, he wants to help the team and works hard for it,” Fabinho told ESPN Brasil.

“It’s always been the case and it hasn’t changed at all. He keeps scoring goals, which everyone is used to seeing. In the changing room he’s always talking to everyone and making jokes. I don’t see anything affecting him.