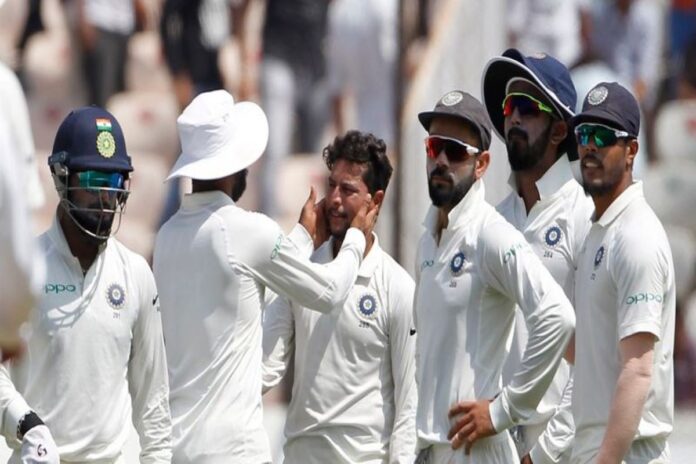 Ajit Agarkar has expressed his disappointment at the absence of Kuldeep Yadav in the Indian Playing XI for the Brisbane Test, as Washington Sundar received a call-up ahead of him. The former Indian pacer has also added that the wicket would flatten out and a spinner will be beneficial later.

Kuldeep Yadav was hailed by Ravi Shastri as the first-choice spinner for the Indian team after the victorious 2018-19 Border-Gavaskar Trophy, but the irony of the statement has him playing a total of zero Test after that. As the injury-laden Indian team made the sojourn in Brisbane, one would’ve expected Yadav to fill in for Ashwin but the role eventually went to Washington Sundar, a ploy that has infuriated Ajit Agarkar.

“I think Kuldeep should be very disappointed, and why shouldn’t he? After the last Test of the last series, he was the No. 1 spinner for India. He hasn’t played a Test since I think. If you’re going in with five bowlers, which they’ve obviously looked at the experience and perhaps thought need a cushion,” Agarkar said on the ‘Extraaa Innings’ show on Sony Sports Network.

“But why not play another spinner? It gives you that balance in the attack. If the pitch flattens out, and there isn’t much for the quicks, then suddenly it becomes a one-dimensional attack,” he added.

Kuldeep had picked a five-wicket haul in Sydney – his last-ever Test match in January 2019 and has not been considered thus far. Even in Brisbane, he could’ve warranted a spot to bowl alongside Washington Sundar given the fact that the flatness might play its part. Agarkar pointed that out while expressing his frustration.

“Even in that attack, there isn’t anyone like Mitchell Starc, who’s out and out like a quick bowler. So if there is a sameness in the attack, they might as well provide that variety which Kuldeep provides. He’s done well earlier in Australia and yes, there is this thing about him that he bowls a little slow but conditions here will afford him that pace naturally. So very surprised that he’s not playing and he must be very disappointed.”