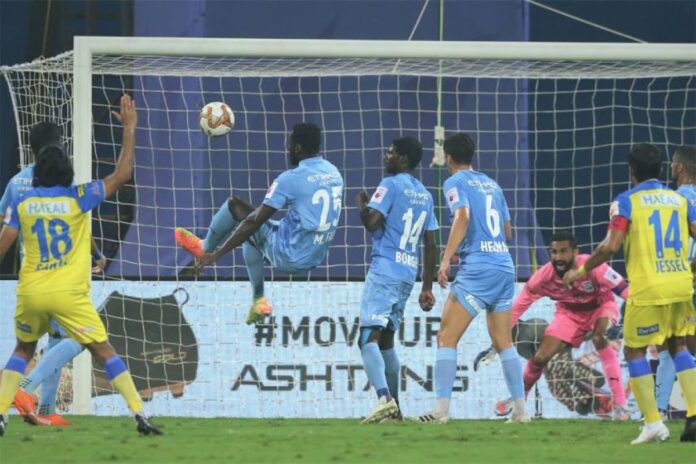 The Islanders are back to the top of the table with a comfortable win over Kerala Blasters by 2 goals at the GMC Stadium, Bambolim on Saturday

First-half goals from Adam Le Fondre (3’ P) and Hugo Boumous (11’) ensured full points for the Islanders who are now unbeaten in their last seven games.

Mumbai punished Kerala for an early error which gifted them the first goal in the third minute. Boumous latched on to a Vicente Gomez back-pass and the Frenchman was brought down in the box by Nhamoinesu and won a penalty. Le Fondre netted his sixth goal of the campaign despite Albino Gomes getting a leg to the ball.

Mumbai doubled their lead in the 11th minute and this time, Boumous got his name on the scoresheet. Ahmed Jahouh sprayed a long ball from his own half towards Boumous from a free-kick, and the Frenchman made it look easy as he got past his marker and slotted past Albino.

Kerala put up an improved performance in the second half. They created chances early and nearly pulled a goal back in the 55th minute. However, Jordan Murray’s effort was ruled offside.