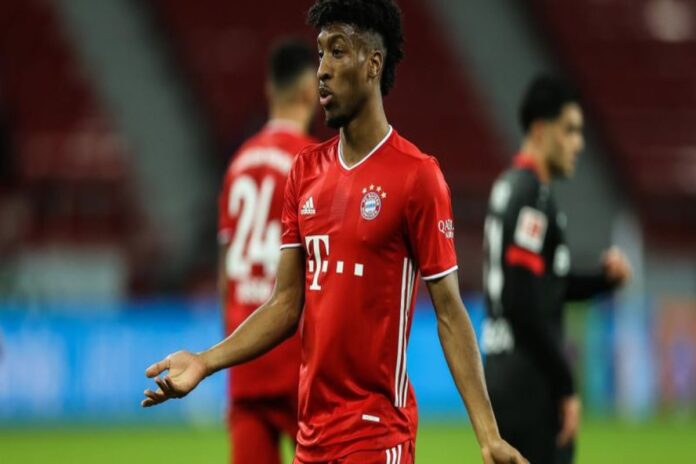 Bayern Munich attacker Kingsley Coman has admitted that he is flattered at the interest being shown in him but asserted that he is committed to Bayern at the moment. The 24-year-old hasn’t been the most consistent footballer but played a key role for the club as they won the treble last season.

Despite playing an important role in Bayern Munich’s success in winning the treble of the Bundesliga, DFB-Pokal, and the Champions League last season, speculation has been rife about Kingsley Coman’s future. The Frenchman, who scored the winning goal in the Champions League final, has struggled to nail down a place for the Bavarians with injuries hurting his time. That combined with the arrivals of both Leroy Sane and Douglas Costa this summer has seen Coman reportedly open to leaving.

It has also attracted attention from across Europe with Manchester City and Manchester United keen on signing the 24-year-old. But in a recent interview, Coman admitted that he has a contract with Bayern Munich until 2023 and is happy staying at the club. The French forward further added that while he feared he wouldn’t get game-time, that hasn’t been the case and he’s happy that it wasn’t the case.

“It’s good to know that good teams are interested in me, it gives me additional confidence.  But I have a contract here until 2023, I’m just thinking of Bayern. It’s all good, I’m happy. I had the feeling that I could be used less often. I’m 24, that’s an age I have to play! Fortunately, my fear did not come true,” Coman told SportBild.

After nearly a year of chasing after him, and then waiting as he recovered from a knee injury, Bayern Munich finally signed Leroy Sane this summer. The German winger’s arrival added more competition for places with Jamal Musiala, Serge Gnabry, and Douglas Costa alongside Coman and Sane competing for two places on the team. But despite that, Coman admitted that Sane’s arrival has been good for the club and the competition has forced the players to be at their best every single game.

“Leroy is very good, we play differently from City, he will only completely internalize our DNA. There’s four of us fighting for two positions, we’re team-mates, but of course, we all want to play as much as possible.”

“At the moment I’m in a good mood, but maybe that will change in two months. Maybe then Leroy, Serge [Gnabry] or Douglas [Costa] will play. It is important that at least two of us are always in top form,” he added.