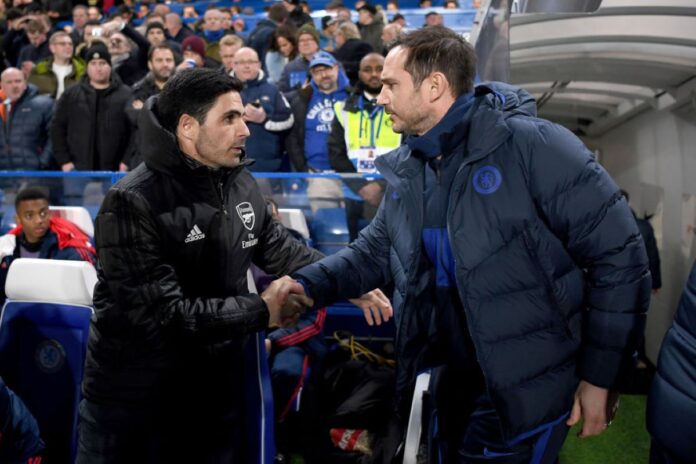 In light of the rumours surrounding Frank Lampard’s future, Mikel Arteta confessed that managers need time to create something and that is not something they’ve been given this year. The Chelsea boss is under immense pressure following a run of poor results with the club in the league.

While reports have indicated that Chelsea are willing to give Frank Lampard time to turn this run of form around, the pressure around the Blues’ boss has kept on rising over the last few weeks. That is especially in light of the London club’s terrible run of form with them losing five out of their last eight league games. It has seen Lampard come under a lot of criticism especially since the London giants spent well over 200 million over the summer to reinforce the team.

But it has seen managers, and players, come out in support of the Blues boss with Mikel Arteta the latest to do the same. The Arsenal boss only just survived a difficult run of results after the club’s form nosedived between November and December which saw him admit that Lampard needs time. Arteta further added that he would like to see Chelsea support their club legend especially since this year has not allowed managers time to tweak and create something.

“I have known Frank for a few years and I spent some time with him and I would like the club to support him and give him a chance. He has huge experience as a player, he is an icon over there. You need time, and something we have not had in this calendar year is time to work on anything,” Arteta said, reported ESPN.

The Gunners endured a terrible run of form in the winter with them going seven league games without a win and it saw many call for Arteta to be sacked. However, Arsenal’s board and upper hierarchy backed the Spaniard and it saw him admitted that he hopes Lampard gets the same. Arteta further added that if the club does give him time and can see the long-term picture, then they’ll reap the results in the future.

“I can only talk about what I have experienced … it was full support in difficult times. Fortunately, if they see what you are trying to do is going to have rewards in the future, and they are a little bit patient, most of the time it pays off,” he added.