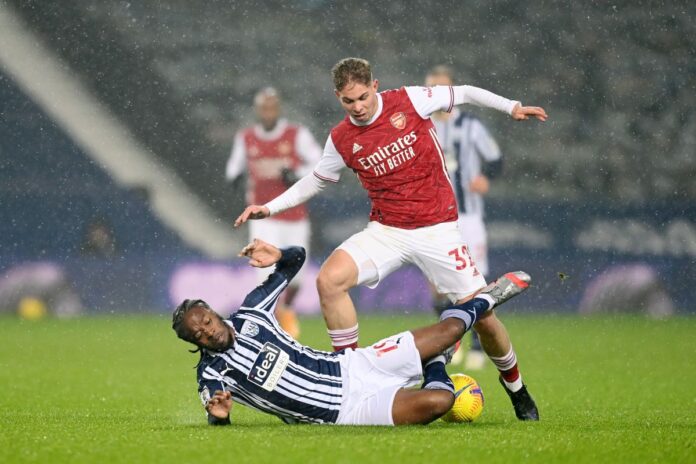 In light of Emile Smith Rowe’s performances recently, Mikel Arteta has claimed that the Englishman has the potential and capability to become as good as both Jadon Sancho and Phil Foden. The 20-year-old has turned things around at Arsenal with him playing a key role in the club’s recent run of form.

With Mesut Ozil ostracised from the club, Arsenal have struggled to find that creative spark in their team which has seen their results suffer and Mikel Arteta come under immense criticism. However, since a 3-1 London derby win over Chelsea on Boxing Day, things have changed with Emile Smith Rowe playing a key role in that change. The 20-year-old has played every game since including that game against the Blues and has impressed in the number 10 role.

That has seen the hype around the Arsenal starlet grow especially with his teammates from the 2017 U17 World Cup thriving across Europe. It has seen Mikel Arteta admit that Smith Rowe has the potential and the capability to become as good as Phil Foden and Jadon Sancho, Rowe’s teammates from the U17 World Cup. The Arsenal boss further added that the aforementioned duo have played more minutes and gained more experience over the last few years but Smith Rowe can still reach that level if he keeps playing consistently.

“He (Emile-Smith Rowe) has huge potential. He really wants it and he has the personality when he goes on the field to express and play the way he can play. To do it in a consistent way is a different thing. The boys that you mentioned (Jadon Sancho and Phil Foden), they’ve done it. It’s true that they’re ahead in their development phase because they’ve played many more minutes and games in the last two seasons,” Arteta said, reported Goal.

“But he is capable of doing that. Whether he’s going to do it will depend on how he continues to develop, how he takes the chance that he has in front of him and how much we can help him to achieve that.”