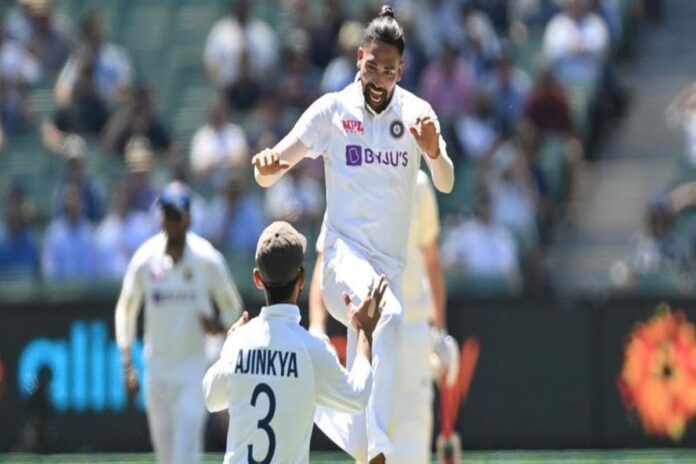 On the penultimate ball of the 97th over of the Australian 2nd innings, an over-enthusiastic Siraj, bowling his 20th over, charged to the ball after Hazlewood tapped and ran, aiming to steal a quick single. Siraj wisely had a shy at the stumps, but the end result would be 5 bonus runs for Australia.

In the context of the game, at that moment, the overthrow meant zilch. Only the previous ball Siraj had sent Nathan Lyon packing with a nasty, uncomfortable short one aimed towards the hips, and, despite the lower order’s best efforts, 59 was Australia’s lead on an MCG wicket that’d turned into a batting paradise. It was the final stand, and so had Siraj hit the stumps, he would have finished with figures of 3/31, while also ensuring that the target for his side was a meager 60; he had every right to go for it.

Eventually, the debutant missed the stumps, but although the five overthrows that were conceded were completely down to the indolence of the fielder backing up, Ravichandran Ashwin, Siraj went on a long self-loathing tirade. He put his palm over his face in anger and frustration and had the look of a man who was fuming, disappointed and remorseful that he’d let his team down.

This act of Siraj was his second such in the innings after he’d earlier burnt a review – a terrible one; the ball pitched well outside Wade’s leg-stump – by convincing his captain to go upstairs. There, too, the fault predominantly lay with the wicket-keeper, yet Siraj would show no mercy upon himself and would let out a stream of invective, all directed towards himself.

Those were two not-so-key moments from the MCG Test which perhaps Siraj, himself, would have long forgotten by now, but they underlined something significant: that Siraj knew he belonged, that he, with his victory-at-any-cost attitude, was a natural fit in the ‘new India’.

Success comes with perseverance and few know the pain of drudging and laboring better than Siraj. He earned his maiden Test call-up back in 2018, yet post that he saw his stocks take a nosedive – not necessarily for any fault of his. A fruitless – to put it lightly – IPL campaign in 2019 had deleterious effects on his name, brand, and reputation – despite him continuing to impress with the red-ball –  and by early 2020 he found himself in the pecking order behind Navdeep Saini, a bowler with no real experience and a much inferior first-class record.

In an unfortunate era where formats are often mixed, Siraj salvaged his reputation to an extent via a decent showing in IPL 2020, yet, despite a stellar showing in the warm-up matches, the jury was still out when he donned the Indian whites for the first time at the MCG.  And as if he didn’t have enough in his plate already – series on the line; replacing Mohammad Shami; losing the toss – skipper Rahane augmented Siraj’s woes by not throwing him the ball until the 28th over on a flat wicket.

Yet, even those who branded his wicket of Labuschagne as ‘lucky’ couldn’t help but tip their hat off to the youngster by the time he sent down the last ball of his 15th over.

Incredibly Siraj got more swing – 0.58 degrees in the second session compared to 0.74 in the third – and hit better lengths – 44% good length deliveries in the first session compared to 66 in the second – as the day progressed, typifying his prowess with the red cherry.  Ball after ball – he ran in, relentlessly, with controlled yet not exaggerated aggression, and by mid Day 1 he’d impressed Rahane to the extent that, despite not bowling a single ball until the 27th over, he ended up bowling 3 more overs on the day, all with the old ball, than Umesh Yadav, one of the finest proponents of reverse swing. By the time he completed the catch off Pat Cummins to bowl Australia out for 195, most of the doubts had been erased.

What was the most remarkable aspect about Siraj’s Test debut was that it was as if he improved, and in turn scaled new heights, every time the difficulty level increased by a bar. Umesh walking off with a calf injury meant that Siraj had to more than just ‘impress’ in the second innings, and had to essentially perform the role a seasoned campaigner would do. Astonishingly, he did.

Taking up the dual role of looking for wickets whilst not giving the batsmen an inch, Siraj bowled with dogged determination for 129 balls and reaped deserved rewards.  A grueling seven-over spell on the morning of Day 4 – where he accounted for the wickets of both Green and Lyon – turned out to be the highlight, but the standout factor was that not once did it feel like India were not operating at full strength. Siraj upped his game to the level that the team at no point remotely missed the services of both Ishant and Shami – he had summoned Ishant’s workhorse-ness and Shami’s dexterity, forged it and injected it into himself.

Siraj is not the first Indian seamer to leave an early impression. Nor will he be the last. Among those who waned in the longest format – albeit for different reasons – are Praveen Kumar, Bhuvneshwar Kumar and version 1.0 of Ishant Sharma, all of whom had promising, jaw-dropping starts to their career. Yet while each of those three, in order to excel, needed conditions to fall in their favour in one way or the other, Siraj showed at the MCG that he can transcend the intangibles and devise a cosmopolitan formula bound to yield success on any given day, against any given opposition.

That he can jag the ball around in helpful conditions has been well documented – even the casual cricket fan was exposed to it during the IPL, in his spell versus KKR in Abu Dhabi –  but at the MCG Siraj – showcased versatility that is bound to make him a universal asset. On day 1, he showed that he’s a thinking, intelligent bowler by setting up Cameron Green with three outswingers, before sliding in an outswinger.

Earlier in the same day, he showcased his discipline, control and his tactical nous by bowling to a leg-side field to dismiss Labuschagne and on the final day, he unleashed two nasty short ones that beat both batsmen – Green and Lyon – for pace. Certainly, barring Jasprit Bumrah in 2018, it is hard to think of any other Indian seamer since the turn of the past decade who left such a lasting impression in their first ever outing on away soil, particularly taking into consideration the circumstances.

As much as he’s a product of India’s rigid pipeline, Siraj is also an offshoot of his own unwavering mental fortitude. The trolls, jokes, memes and hatred that have come his way, over the years, have, if anything, only made him stronger, and it is to be remembered that only last month he lost his father. Opting to stay back and represent his country was the biggest decision of Siraj’s life and he has, thus far, done complete justice to it.

That said, however, bigger and tougher challenges lie ahead. Siraj will, unlike the second Test, enter the third game with firm expectations on his shoulders. The third Test will be played at the SCG, where conditions will favour batting even more than the MCG, meaning bowlers, besides being relentlessly accurate, will also have to constantly keep thinking out of the box. There will be more scrutiny on the Hyderabad pacer – video analysis, pattern reading etc –  and the Aussies, one imagines, will be better prepared for whatever is set to come their way in three days’ time.

Siraj will go a long way if he does manage to replicate his MCG heroics, but perhaps he needs to be a bit easy on himself should he concede an overthrow or burn a review in his quest of doing so.