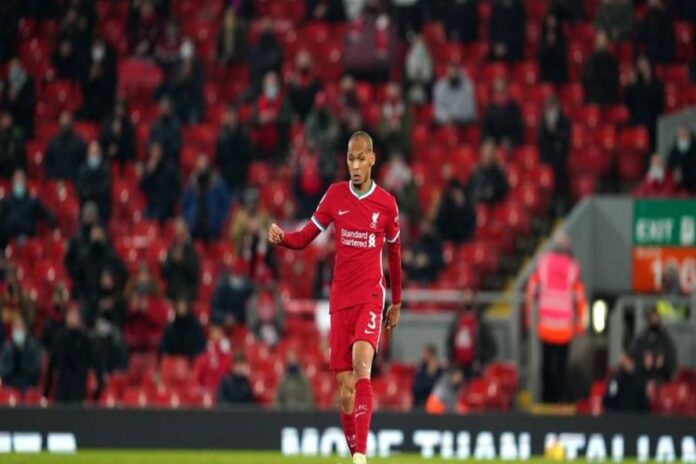 Fabinho believes that winning a back-to-back league title would put this Liverpool team into the footballing history books alongside the likes of Manchester City. The Reds currently sit first in the Premier League table with four points separating them and second-placed Leicester City.

While winning a Premier League title is hard, some believe retaining it and winning a back-to-back league title is even harder especially in modern football. Pep Guardiola and his Manchester City side were the first to do it since Sir Alex Fergusson and his Manchester United did it between the 2006/07 season and the 2008/09 season. However, with Liverpool sitting four points clear of the chasing pack after fourteen league games, it has fans wondering if Jurgen Klopp’s side can manage it.

Things might get complicated in a season as congested as this one especially with Manchester City, Leicester City, Chelsea, Manchester United, Tottenham, and a flurry of others chasing after them. But in a recent interview, Fabinho admitted that winning that second title would place this Liverpool team into the footballing history books. He further added that it would place them alongside the best teams in Premier League history and that is what they’re aiming for.

“Yes, this team will be remembered for how well we play, the quality of our football, and for winning the title. But to fight for the second one would put us further into football history. It would put us up there with teams in the Premier League that have won back-to-back titles. Teams like Manchester City. It would put us on the higher level and put us with the best teams in the history of the league,” Fabinho told the Daily Mail.

“Taking into account everything that has happened this year, the difficulties of no fans in the stadiums and the busy run of fixtures and injuries we have had, it all adds to making the second title more special than the first one if we could do it. It would show that we have this constant desire at the club to be winners.”