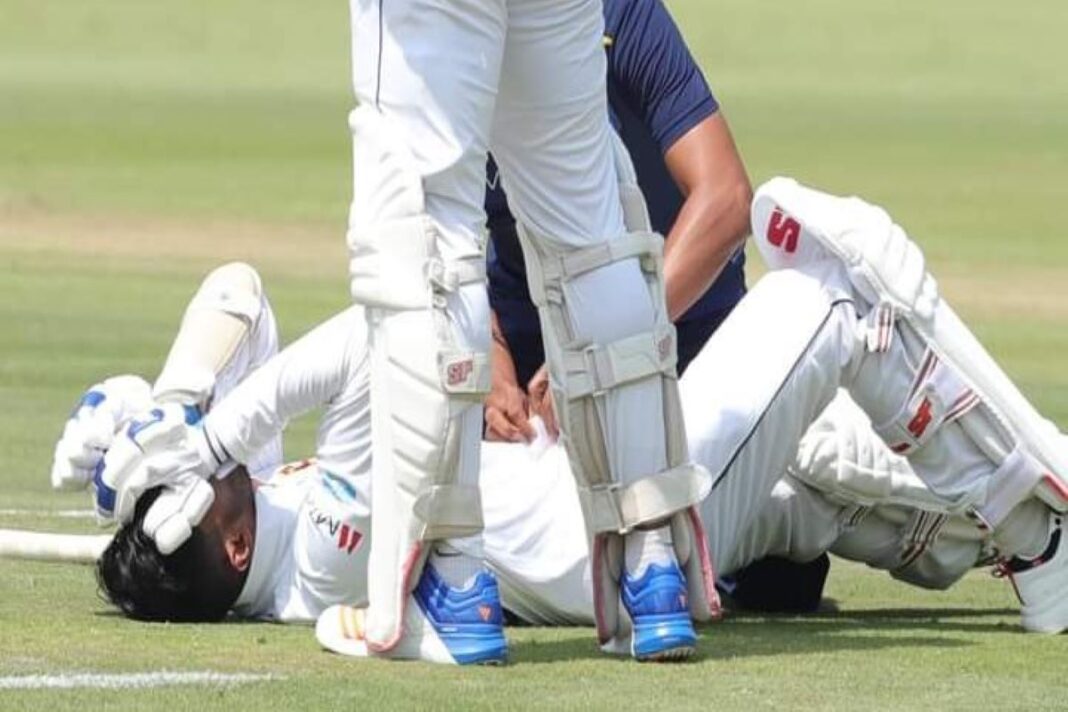 A quick glance at the scorecard of the ongoing Test between South Africa and Sri Lanka will lead you to believe that it has, thus far, been an evenly contested bout.

After two days the Proteas, placed comfortably at 317/4, are 79 runs behind Sri Lanka, who themselves registered their highest ever total on South African soil. From the outset, it is just the kind of scorecard that drawls “evenly poised”.

However, a bit of context will go a long way in rightfully guiding people to the prism through which this game, and the scorecard, needs to be viewed. In reality, this match couldn’t be farther away from being an even contest – it is essentially an 11 vs 9 handicap match.

After losing their best batsman on Day 1, Dhananjaya de Silva, to a thigh injury, Sri Lanka entered Day 2 crippled, knowing that they had to battle through the rest of the match with a batsman short – not an ideal scenario away from home; not particularly in a country like South Africa, at least. However, their woes were augmented just an hour into the day’s play when one of their three premier seamers, Kasun Rajitha, pulled up and walked off the field injured after sending out just 13 balls. Rajitha’s injury meant that Sri Lanka were staring at the prospect of playing four full days of Test cricket with a two-man disadvantage – not necessarily for any fault of their own, but because of archaic rules in the sport that continue to belie logic and belief.

As of December 28, 2020, Cricket stands to be the only team sport that does not allow the accommodation of in-game injury substitutions, with the exception of concussions. Football, Hockey, NBA, NFL, NHL and AFL, among other sports, all permit the usage of multiple in-game substitutes, yet despite its per-game-duration dwarfing every other aforementioned sport, Cricket has remained hell bent on its stance against the introduction of injury substitutes.

But with every passing year, there is growing evidence of why, at least in Test cricket, the administrators’ stance against the introduction of injury substitutes – which extend beyond just concussion subs –  is ludicrous. The ongoing farce in the South Africa vs Sri Lanka game is a damning indictment of the irrationality that has now extended for far too long.

Take a step back and assess the absurdity of the situation Sri Lanka find themselves in: they entered the game still mathematically alive in the World Test Championship, yet for absolutely no fault of their own they have been forced to combat 80% of the game with a two-man disadvantage. Essentially they are at risk of losing out on reaching the WTC Final because the rules of the sport does not allow them to use the same manpower as their opponents, despite crossing no line and committing no crime. Their situation is akin to that of England, who in the first half hour of Ashes 2019 lost the services of James Anderson, after which they played the rest of the game with 10 men. The ICC and MCC might brand these incidents as rare, unfortunate occurrences, but what they are, really, is a projection of an unacceptably diabolical rule that is making a mockery of the sport.

Unlike other sports, there is no intrinsic need for Cricket to introduce tactical substitutions. However, the least that needs to be done – and there should be no debate surrounding this – is allow teams to swap or substitute players – with a like-for-like replacement – when a player part of the original XI injures himself/ herself to the extent that he/she will be able to take no further part in the game. By doing so, apart from ensuring that one side is not forcibly punished and handicapped despite being innocent,  the integrity of the game will also be maintained, as, unlike the current ru

e which preposterously tilts the balance in favour of one team, parity will be restored.

Concussion substitutes were prudently introduced with an eye on safety and the long-term well-being of players, yet by constantly turning a blind eye to the possibility of bringing in injury substitutes, the ICC are directly endorsing a compromise in the integrity of matches. It is truly absurd that, by the current rule, teams hit with injuries are being forced to play with a man disadvantage. While this is yet a crisis manageable in ODIs and T20Is, where the duration of the matches is no more than one day, to force teams to play with a man short in Test cricket, across five days, is cruel, unreasonable, unjust, and unacceptable.

While there will be the argument that the plethora of injuries – mainly muscle – we currently are witnessing is largely due to players’ body not being ready and rigid due to lockdown, there has been enough evidence across the past three years to suggest that cricketers, particularly bowlers, are always suscept to pulling a hamstring or tearing a muscle or twisting an ankle in the midst of a game. Josh Hazlewood, Bhuvneshwar Kumar, Shardul Thakur, and James Anderson have all, in the past two years, prematurely exit games due to muscle issues, and there have been myriad other instances where non-head related physical injuries have cut the participation of players short. In all these instances teams were forced to play with 10 players + a substitute fielder. This needs to change.

The fix is simple: the moment a player is deemed ‘unfit’ to carry on for the rest of the game, the officials need to allow the injury-struck side to replace him/her with a like-for-like cricketer. The injury replacement will then complete the rest of the game – basically, a concussion substitute with a different name.

The obvious questions will, of course, pop up.. “What if teams misuse this rule? What if teams fake player injuries so that they can replace him with a better, fresher player?”. Indeed, the possibility of teams working their way around the rule cannot be ruled out. But then again, no new rule can and will be perfect. It needs to be first implemented, experimented with, after which the results will need to be extracted and analyzed. Even the DRS, when it was first introduced 12 years ago, was far from perfect. Yet more and more improvements were made with time, thanks to inputs from teams and players. Ultimately, even if a team or two manages to misuse the rule, it will still do more good than harm, for the existing regulations have been killing sides, and in turn the sport.

Right from scrapping the boundary-countback rule to giving the authority to third umpires to call no-balls, the ICC have been reactive with their rule changes in recent times. If they were waiting for disaster to strike, it just did in Centurion, where the Lankans have been falling like a pack of cards. Maybe, just maybe after one more reactionary rule change, we will finally be able to read and interpret scorecards as they are, without giving an ounce of importance to the context.