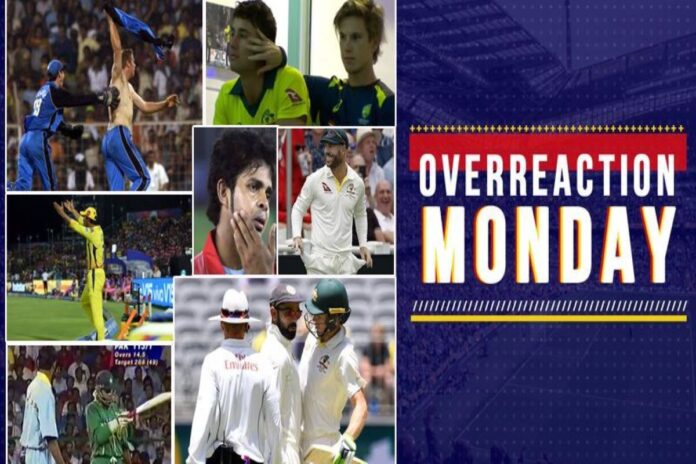 While a majority of Indians are still recovering from the loss in the first Test, their performance in the second Test combined with some of the comments from the cricketing experts has landed us here. Who features and who doesn’t, well find out yourself!

Ross Taylor still reckons he has ‘T20’ cricket in him

After Ross Taylor’s drop from the T20 squad for the series against Pakistan, the right-hander opened up about how he still has ‘T20’ cricket to give to the country.

SC’s Take: It is 2020, we have Professor still being an earnest student of the game for Pakistan but unfortunately, for Ross Taylor, he wasn’t picked in the squad for the Pakistan series. Now it has created some chaos, even inviting comments from the right-hander himself, who reckoned that he still has enough ‘T20’ cricket left in him and was disappointed by the selection. But the real question is, is he still good enough or has he done substantially better than the others in line?

Two players – Devon Conway and Glenn Phillips – have taken the spot away from the right-handed veteran, who in his 7 T20Is this year has scored just 166 runs, at an average of 33. But it’s the strike-rate which has been under par at 127.69. Conway in six games has more runs than Taylor and a strike-rate of 151.30.

Now if you combine that with Phillips, who has scored 184 runs at an average of 46 and strike-rate of 191.66, you get two players miles better than Taylor. So in short, Taylor really doesn’t deserve to be in the T20 setup if he’s replacing them.

Immediately after Ajinkya Rahane’s century at the mighty ‘G, the Indian fans drew a comparison between Rahane and Kohli, calling Rahane ‘miles and miles’ better away from home.

SC’s Take: Have you ever been in a toxic situation or relationship in the past? If yes, I feel for you the same way I feel for the Indian fans who think Ajinkya Rahane is better than Virat Kohli. Imagine the ‘so-called’ critics brewing and stirring this up to a level where there are more sheep that are following the herd. And then the absurdity to call Rahane better than Kohli because he scored a century overseas. Even just from a statistical point of view, Kohli is six centuries ahead and plenty of runs too.

Also, when Rohit Sharma landed in Australia with Kohli’s exit, they all pointed at how the prince had arrived and ready to take Australia by storm while the King exited. That’s the issue, that’s where the Indian cricket travelled 20 years back and took a nosedive. Both Rahane and Kohli are India’s two of the best batsmen and that shouldn’t come at the expense of one being over the other. If that’s the way, you might very well favour Cheteshwar Pujara to be better than them all.

After two straight failures for the Indian opener, the critics, the experts and the social media trolls have targeted Mayank Agarwal’s head and have called for the Karnataka opener to be dropped to accomodate KL Rahul

SC’s Take: It might be foolish to give a take on this topic but given the absurdity that stemmed from critics appearing on the television sets, we really need to address the ‘elephant’ in the room. Now if you are confused about what the elephant really is, as they say it on the television, Mayank’s mode of dismissal in the first and second Test had a huge gap between the bat and pad and a heavy backlift in the second. Make no mistake, this is the opener who single-handedly was responsible for India’s thwarting of Nathan Lyon in the 2018 series.

Not just that, making a mountain off a molehill is something that the Indian fans and the critics do well in equal measures. From the endless call to boot out several players after the debacle in Adelaide to not letting the players live in peace, we just need to calm down and probably not pull the players down. Now that Shaw is off the agenda, Mayank has been pushed on that list and his head is next for the chops but seriously, stop!

Ajit Agarkar was of the opinion that Shubman Gill’s debut came two years late in the Indian colours when he walked out against Australia at the iconic ‘G in the second Test.

SC’s Take: Perhaps having opinions shouldn’t have been free in the first place, perhaps having the tag of ‘cricketing experts’ shouldn’t be a thing in India but let’s keep that for another day. Ajit Agarkar, who has seen the rise of Shubman Gill, should have rather known that, two-years ago, Gill was still 18 and had only announced himself on the biggest stage as a U-19 cricketer. He had the potential; he was well ‘touted’ by the cricketing circuit to be the next big thing in the country but time always helps you make the right decision.

Two years ago, India already were content with KL Rahul, Mayank Agarwal, Rohit Sharma and Prithvi Shaw as their four openers. They didn’t need more problems and really didn’t look at Gill as an opener in the longest format but rather a potential youngster who could be slotted in the middle-order which at times looked fragile. In 2019, Gill made his debut against NZ in an ODI series where he looked lost. If anything, his Test debut has come at an opportune time for Indian cricket, as they look to heal themselves from the humiliation in Adelaide.