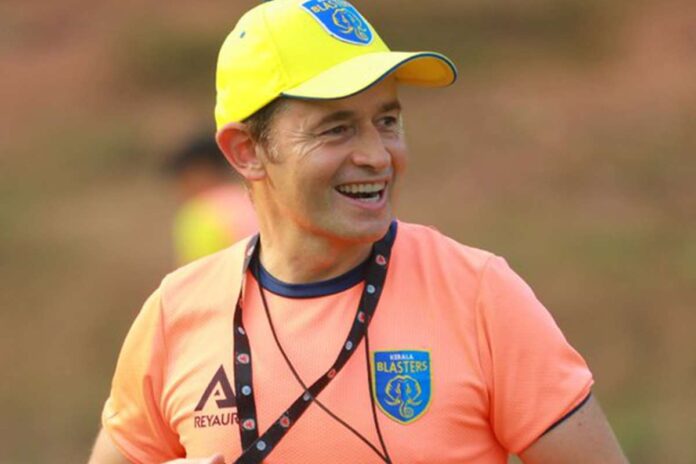 Kerala Blasters FC head coach Kibu Vicuna feels that they deserved to win the match against Hyderabad FC, which was incidentally their first win of the season. The ‘Tuskers’ are placed at the ninth position of the league with six points from seven matches, ahead of SC East Bengal and Odisha FC.

It’s not that Kerala Blasters FC has been performing well, but that they have waited so long for their first win is surprising, especially with a balanced team at their disposal. The ‘Tuskers’ have lost their most potent weapon – Sergio Cidoncha – due to an ankle injury for an extended period, adding misery to their case. But Kibu Vicuna’s men finally staged an inspiring display against Hyderabad FC to register their first win of the season last Sunday evening. Their manager believes they deserved to win the game.

“I am satisfied because we played well against a very good team, a team who are playing well this season. Kibu said after the match. We played a good match, we deserved to win tonight and I am very happy because in the last three weeks we have been training well and we are seeing the results now,” said Kibu Vicuna, during the post-match press conference.

Hyderabad FC has been decent in the ongoing season, with their strikers Aridane Santana already making a mark, while Francisco Sandaza made his debut last night. In spite of creating some good opportunities, they were not able to find the back of the net, while Kerala Blasters FC netted twice to earn the bragging rights.

“At half time, I spoke about some tactical issues, whatever they needed to do. But most important thing was to score a second goal because Hyderabad is a team that has good strikers like Aridane and Sandaza. At the beginning of the second half, we had the best chances, two good chances for Jordan Murray and Sahal. We didn’t score then but Jordan scored in the end and we had a deserving win,” added the manager.