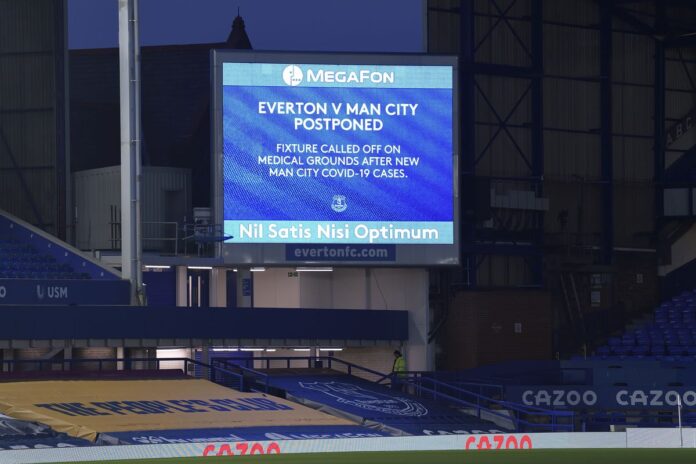 According to an official statement, Manchester City’s match against Everton on Monday night has been postponed after positive COVID-19 tests within City’s squad. The Cityzens already have four people, including two players, in self-isolation after recent positive tests with more testing positive.

For the second time this Premier League season, the league is set to reportedly postpone a game after they did the same for Newcastle’s game against Aston Villa. According to multiple reports, including Simon Stone from the BBC, Manchester City’s game vs Everton is set to be postponed with that now confirmed by the Cityzens.  In a statement released by the club, the Manchester giants have revealed that the game has been postponed due to positive COVID-19 tests.

This is beyond the four that the club have already reported, which includes Gabriel Jesus and Kyle Walker, with iNews reporting that the club have upto five new positive tests although there has been no official confirmation. The statement further revealed that the league consulted with both teams before they “decided to postpone the fixture” for a fear that the club’s bubble was compromised.

“Manchester City FC can confirm that this evening’s Premier League fixture at Everton has been postponed. After the latest round of Covid-19 testing, the club returned a number of positive cases, in addition to the four already reported on Christmas Day,” reads the statement on Manchester City’s website.

“With the security of the bubble compromised, there posed a risk that the virus could spread further amongst the squad, the staff and potentially beyond. Based on strong medical advice the Premier League, in consultation with both clubs, have decided to postpone the fixture.”

This becomes the second game, in the Premier league, to be postponed over the coronavirus since it started and the league’s statement revealed that they made the decision after a board meeting. It further revealed that the reason they’ve taken this is because of an increase in positive tests at City which forced their hand.

“This rise has created uncertainty and the Premier League Board received medical advice that the match should be postponed. The Board agreed to rearrange the game as a precaution, and further testing will now take place tomorrow. The decision has been taken with the health of players and staff the priority.”