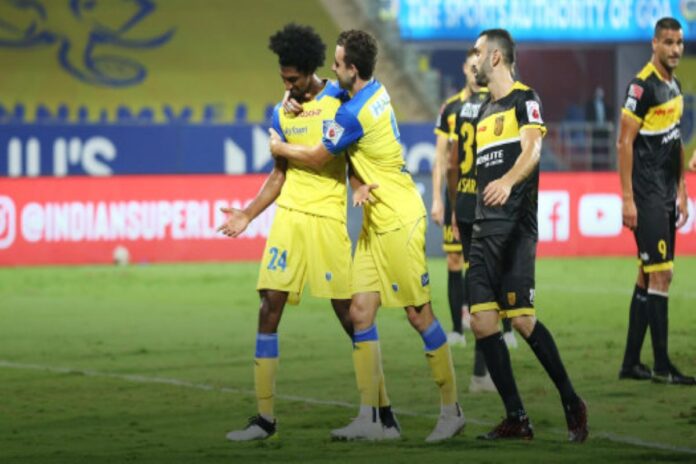 Kerala Blasters dished out a complete performance as they edged Hyderabad FC 2-0 to secure their first win of the Indian Super League (ISL) season at the GMC Stadium in Bambolim on Sunday.

Both sides created chances in the first half but it was Kerala who headed into the break with a lead.

Kerala started on a bright note and looked dominant throughout. Hyderabad too created a few half-chances with Aridane Santana failing to take them.

Both sides fought neck-and-neck but Kerala grabbed the opener just before the half-hour mark through a set-piece. They won a corner and Facundo Pereyra whipped an inch-perfect cross for Hakku, who bagged his first ISL goal through a pin-point header.

After the half-time interval, Hyderabad FC’s defense looked even more brittle. The likes of Jessel Carneiro and Sahal Abdul Samad kept getting good chances to either come up with a cross or a shot.

Then, a deep long ball gave Jordan Murray a half opportunity at scoring his first goal but the Aussie couldn’t control the ball. Hyderabad FC did have a couple of chances against the run of play but the Kerala Blasters FC defense stood tall.

Coach Manuel Marquez Roca stated after the match that his players lacked the attitude to win the tie against Kerala Blasters.

“We lost because they played with more attitude. It is one of those days when a coach is very angry because if the attitude fails it becomes impossible to win a game. In the first minute, they showed a better attitude. We also had our chances to score but only for their attitude, they deserved to win.

This performance from Kerala Blasters wasn’t eye-catchy, but it gave them their first win at a crucial juncture of the season.