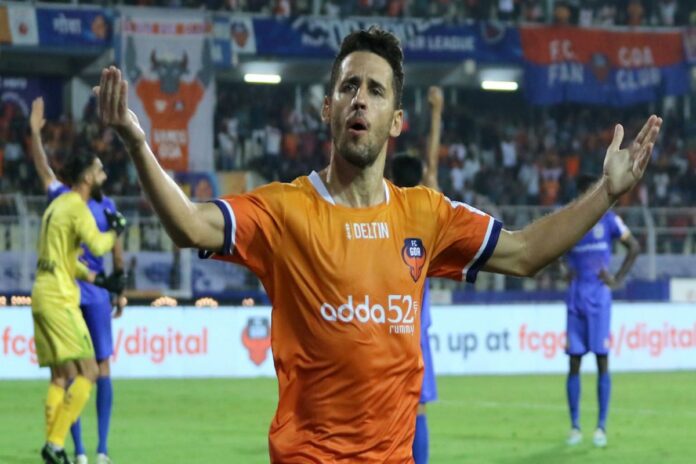 Merry Christmas to all our readers as we approach the last week of the year – with 2021 knocking at the door. Even though we have a two-day break in the Indian Super League, the past week has been exceptional, with action-packed matches and breath-taking individual performances.

Even FC Goa recruiters wouldn’t have expected the returns they are reaping midway through the ISL when they imported a certain Igor Angulo ahead of the new season – even though his goal-scoring capabilities were well documented. Eight matches veteran in India’s top flight, the Spaniard has netted as many goals, to maintain a rare 1 goal per match on an average till now. Having trailed by a goal for 30 minutes, the onus was on the ‘Gaurs’ to re-ignite in the game, which they did with Igor Angulo at the center stage of the fightback. The 63rd-minute spot-kick restored parity, while his strike in the dying seconds of the game meant they registered their third win of the season. With 27 shots at the goal, Angulo has kept the defenders busy throughout the league, which has been his most intriguing stat, apart from the goal count. With the Gaurs at the fifth position in the league, there’s a lot of work to be done by the prolific striker.

Even though Manipuri made his ISL debut a few years back, Bipin Singh never got the due credit for his talent, nor that he performed exceedingly well in the limited opportunities that came in his way. On paper, the winger’s feet might look bleak compared to other hotshots in the league, but with three assists to his name in six matches cannot be deemed as normal by any circumstances for any Indian player. The tally could have increased by a certain extent, if his compatriots on the receiving end, had made better use of their goal-scoring prowess. With 8 shots at the goal, 20 crosses, and an average of 30 passes per game, the footballer is a danger to any team, especially with the speedy runs down the wings. Even in the last game against Hyderabad FC, his inch-perfect cross fell perfectly for Vignesh Dakshinamurthy – who produced a brilliant volley out of nowhere to draw first blood in the fixture last weekend.

The Brazilian is leading by example with the captain’s armband it seems, having bossed the midfield in each and every game for Chennaiyin FC so far this season, Rafael Crivellaro arguably produced his best during their 2-1 win over FC Goa in the last game. Still going strong at a ripe age of 31, the South American scored a goal and assisted the other against the Gaurs last Saturday evening to steer his side to only their second win of the season. Although, his hard work cannot be gauged just on the basis of the above-mentioned stats, with 15 shots and 16 crosses to his name ornamenting his overall feat. Primarily a central midfielder, his blocking abilities need a special mention, with him committing 11 tackles, 4 interceptions, 2 clearances and 6 blocks – making him a complete package that every team craves for. Luckily for Chennaiyin FC, the side will be enjoying the services of the dynamic for the rest of the Indian Super League.

We are quite aware of the exploits of the Aussie footballer, with him guiding ATK-Mohun Bagan to their third-ever Indian Super League title, with seven goals and five assists to his name. David Williams may have missed out on a couple of matches in the opening stages after suffering an injury, but he is back with a bang, having scored a mind-boggling solo strike against Bengaluru FC to guide the ‘Mariners’ to the fifth win of the season and maintain their place at the second position in the league table, with 16 points from seven matches, second only to Mumbai City FC, by virtue of goal difference. What’s more important? The much-needed support to the talismanic striker Roy Krishna up-front, with the duo already proving to be too-hot-to-handle in for other sides in the league.

There has not been much to talk about Odisha FC, with them yet to win a game in the ongoing season, even though they have missed out on bagging full points by a whisker on a couple of occasions. Their game against Northeast United was more of a thriller than just another 2-2 stalemate, with Odisha FC’s Diego Mauricio drawing first blood in the 22nd minute of the game, only to see the ‘Highlanders’ restore parity in the stoppage time of the first half, by a header from Benjamin Lambot. With 1-2 down in the 65th minute, the ‘Juggernauts’ needed some spark in their game, which did happen with the magical feet of Cole Alexander – who netted by virtue of a curler in the 67th minute to level the scores once again. Apart from the strike, the South African is omnipresent in the midfield, having completed 285 passes with an accuracy of 74.77%. There’s no way why other teams should take him lightly for the remainder of the tournament.