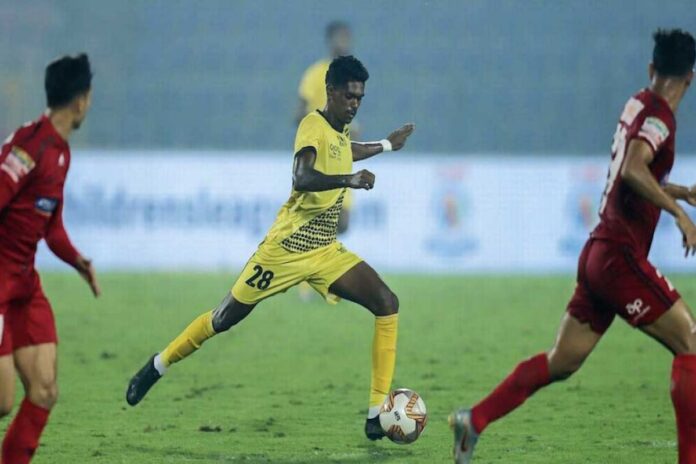 Football action coming thick and fast – what better way to enjoy the last month of 2020, a year which has not been one to savour for many aspects. The ISL is in full swing and there have been some exceptional performances recently, which brings us to this edition of ‘Studs who stole the show.’

The Goa-based footballer does not possess rosy statistics to his name, unlike other players in the list but the impact he’s made for Hyderabad FC in the past couple of matches requires special mention. To say the least, Liston Colaco has set the tone for Indian players in the ongoing season. What was expected from players like Udanta Singh, Ashique Kuruniyan, and Michael Soosairaj for their respective sides – the 22-year old year has done it for Hyderabad FC against all expectations. It was amazing to witness an Indian outfoxing overseas big-ticket defender to provide the perfect assist for teammate Halicharan Narzary to tap in with a faint touch and seal the deal against SC East Bengal last Tuesday evening. Amassing 13 shots, six crosses, and two assists to his name so far in the campaign, he is a talent to watch out for.

Often the ‘unsung hero’ for ATK-Mohun Bagan in the ongoing edition of the Indian Super League, it is high time we give Carl McHugh his due credit. Calm and composed in the midfield, with an ability to hold the ball and negate the odd threat – the Irishman is tailor-made for Antonio Lopez Habas’ style of football. The constant toil during their game against FC Goa directly had an impact on the game, with him constantly blocking the shots from the wrong side of the field. Quite justified he was shortlisted as the ‘man of the match,’ even though he is not a player one would notice throughout the game, but performs his task to perfection nevertheless. McHugh has committed 42 successful tackles in the season – the most by any player till now, with a passing accuracy of 67.55%. Apart from this, the foreigner has amassed 12 blocks, 16 clearances and 13 interceptions, along with a passing accuracy of 67.55%, just underlining his class.

Mumbai City FC – arguably have the best forward line in the ongoing campaign, not that they have a mediocre midfield – with the likes of Hugo Boumous and Rowlin Borges at their disposal. To deny them a goal for more than 60 minutes with 10-men requires serious defending, with Jamshedpur FC producing the same – a display which can be used for case study later on. In the thick of things, was English centre-back Peter Hartley, who gave his heart out and helped his team earn a valuable point and keep their winless streak intact. A total of 32 clearances in the season so far, along with 13 tackles, 5 interceptions and 6 blocks in 5 matches is not an ordinary feat and to do it with finesse shows character. Owen Coyle has shown too much faith in Hartley and the defender has not let him down so far.

Bengaluru FC might have brought in Kristian Opseth for goal-scoring duties, but Cleiton Silva has taken care of the department for the time being. The Brazillian has impressed from the first game itself, unsettling the opposition whenever he had the ball beside his feet. Primarily used as a winger, the foreigner not only scored a goal but also provided an assist en-route to their 4-2 win over Kerala Blasters FC, while he netted the crucial winner against Odisha FC to guide his side to a well-deserved victory. His USP nevertheless remains the way he penetrates through the final third and creates opportunities at regular intervals. Having played five matches so far this season, Silva has scored three goals, provided an assist, while hurling eight shots and 12 crosses in the same time frame. The South American’s utility is one to savour for any team and Carles Cuadrat is making the most out of him.

Couldn’t have possibly ignored the Spanish forward, with him scoring four of the total six goals Hyderabad FC have managed to register so far. Aridane Santana really showed his class by netting back-to-back goals in a span of a minute to steer his team to victory against SC East Bengal earlier this week. Manuel Marquez Roca has built the team, keeping Santana at the epicentre – which reflects big time in the playing style of the ISL side. The Hyderabad boss meant when he said, ‘He (Santana) is a very important player for us, not only due to his performance but also due to his attitude.’ With already 15 shots to his name in four matches, Santana is crucial to Hyderabad FC’s fortune this season, especially with no serious goal-scorers in the squad.