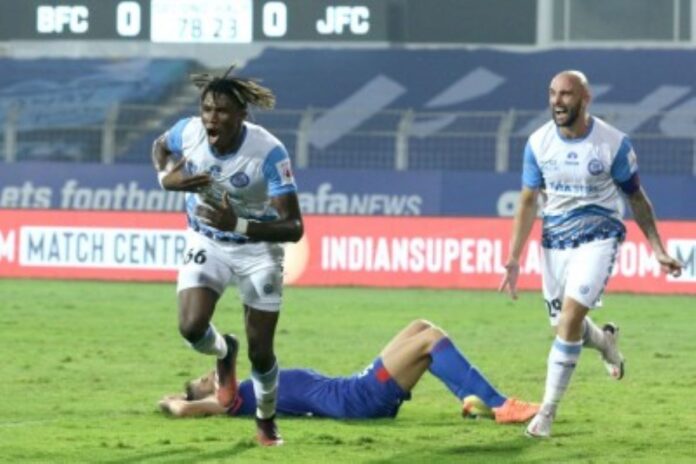 Jamshedpur FC head coach Owen Coyle is convinced that Stephen Eze’s winner in the 79th minute against Bengaluru FC was not ‘poetic justice’, with them disallowed a similar goal in the previous match even though the ball crossed the line. The ‘Red Miners’ are now placed third in the points table.

The peaking of Jamshedpur FC has been remarkable, with them slowly climbing up the ladder in the points table – now placed at the 3rd position with 13 points from nine matches. The ‘Red Miners’ overtrumped second-placed (before the game) Bengaluru FC and logged full points by virtue of a solitary goal last Monday evening – which reminded of Alex Lima’s disallowed goal in the previous match where the ball clearly crossed the goal-line. But Jamshedpur FC head coach Owen Coyle feels that it wasn’t ‘poetic justice’ as they lost three points on the previous occasion.

“It wasn’t poetic justice. It was nice that the linesman was in a good place and obviously the ball was over the line. There is no poetic justice because we lost three points the other night,” said Owen Coyle, during the post-match press conference.

There have been a lot of poor decisions taken by the referees in the ongoing season, with Jamshedpur FC in the receiving end of the most. With them separated from the league leaders by only three points, Owen Coyle feels they would have been at the top of the table had they not been a victim of incorrect refereeing.

“This team keeps giving us everything we got. What has happened so far, we should have been at the top of the table. The points that were taken from us were in unfortunate circumstances.But this group of players work so hard. The players are taking painkillers and injections before playing because we have a number of injuries. Credit to them for the win and we fully deserved the three points,” added the Jamshedpur FC boss.