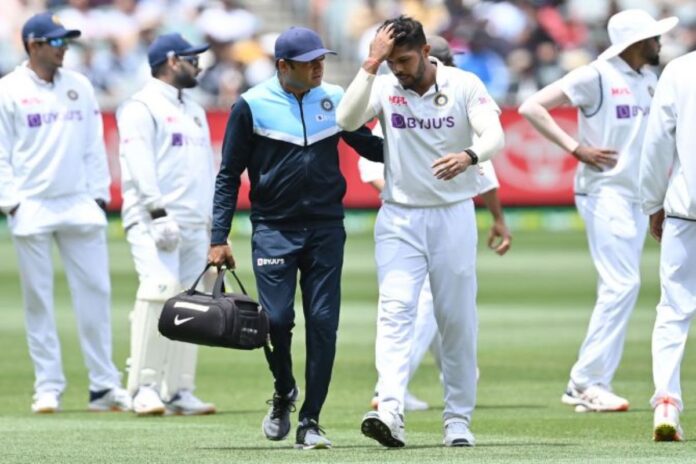 Umesh Yadav sustained a calf injury early into Australia’s second innings at the Melbourne Cricket Ground on Day 3, and it has now emerged that the pacer will undergo scans to assess the extent of the injury. Umesh sustained the injury two overs after dismissing Joe Burns with a peach.

India’s injury-woes seem to be never-ending as they suffered yet another major injury scare on Day 3, with premier speedster Umesh Yadav leaving the field mid-way through his spell after injuring his calf. Umesh, who went wicketless in Adelaide and picked a solitary wicket in the first innings, started off the second innings in fine fashion, removing Joe Burns in only his second over, but the right-armer left the field in the fourth over of his spell.

After bowling 3 consecutive dots to Matthew Wade, Umesh stopped mid-way through his run-up on the fourth ball of the eighth over and left the field in pain holding his calf. The BCCI have now taken to Twitter to confirm that the 33-year-old will undergo scans, which will reveal the extent of his injury.

“Umesh Yadav complained of pain in his calf while bowling his 4th over and was assessed by the BCCI medical team. He is being taken for scans now,” read BCCI’s Tweet.

After being picked for the first Test as India’s third seamer, an injury to Mohammad Shami elevated Umesh as the second choice seamer for the ongoing MCG Test. However, should the calf strain turn out to be serious, should Umesh be ruled out of the next Test, it could see India dig deep and hand a debut to Navdeep Saini.