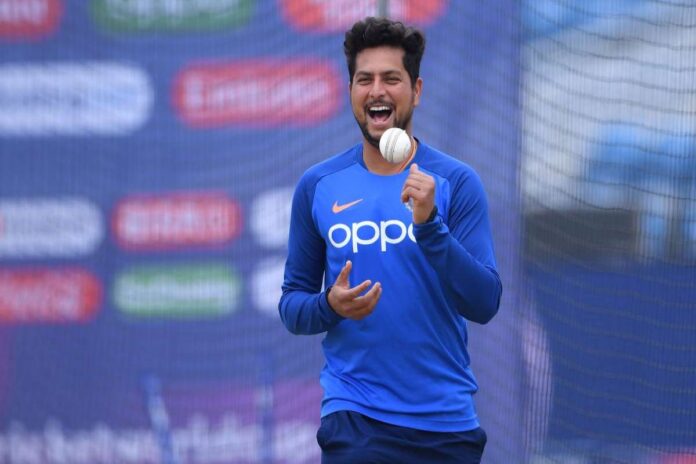 India’s wrist-spinner Kuldeep Yadav believes that spinners might have a role to play in the forthcoming Adelaide Test and has claimed that the slower bowlers are generally hard to read under the floodlights. Kuldeep’s comments come on the back of India fielding an all-pace attack in the warmup game.

India’s Kuldeep Yadav has quashed the perception that pink-ball Test matches are exclusively beneficial to the seam bowlers and has claimed that spinners have a big role to play. Kuldeep, who last played a Test back in January 2019, was not a part of the Indian side that played a three-day pink-ball game at the SCG, as the visitors chose to field a four-man pace attack, but the 25-year-old believes that spinners could be difficult to read at night, in the final session, due to the complex nature of the pink ball.

“I feel it’s difficult to read spinners at night, because if a spinner uses variations it’s not always easy to spot the seam position of the ball,” Yadav told kkr.in.

“That can be an advantage for us. I have never experienced a pink-ball match outside India. So, it will be exciting to see how it goes.”

The pink-ball Test aside, Australia is generally not seen as a land for spinners. Greats of the game such as Muttiah Muralitharan, Ravichandran Ashwin and Harbhajan Singh have all struggled to an enormous extent in the country and the domination by quicks has seen the country be viewed as a graveyard for slower bowlers.

However, despite history supporting the aforementioned argument, Kuldeep has begged to differ. According to the wrist-spinner, who claimed a five-wicket haul in Sydney last year, patience and adaptability are two qualities that a spinner must boast to succeed Down Under. The 25-year-old further noted how the slower bowlers generally tend to get impatient on rather docile Aussie wickets.

“It’ll be unfair to say spinners haven’t dominated in Australian conditions; there have been many instances when spinners have done well down under. It completely depends on how quickly you adapt to, and read, the conditions.

“A lot of us, having played so much T20 cricket of late, will have to be patient when playing Test cricket. Mental toughness is very important. When switching to the longer format, you sometimes tend to try too many things too quickly. Wickets don’t come easy in Test cricket, so patience is the key.”

Kuldeep Yadav played in the first warm-up game against Australia A at the Drummoyne Oval, but was not able to pick up a wicket across two innings.